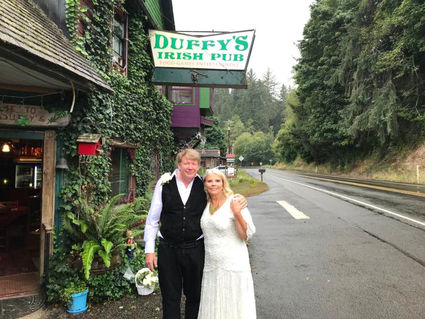 A Wedding for the Ages

When was the last time you were invited to a wedding in which you did not know either the bride or groom? Ron Relethford and Laura Knight, both 62, from the Seattle area placed an ad in The Wahkiakum County Eagle inviting the public to attend their wedding at Meserve Park on Saturday and the reception following at Duffy's Irish Pub. This was something I had never heard of. Why? It doesn't matter, I'm going. I met the couple and they agreed to allow me to share their story with a little bit of perspective from myself; after all, they already had their three week honeymoon and what else could they do?

This couple loves to walk and hike. Ron was doing something he always wanted to do, that is to walk across Washington to the coast. This is when he met Laura at Gig Harbor just southwest of Seattle. She was out walking her dogs when fate stepped in and brought them together. As the famous prophet Forrest Gump had said, they "were like peas and carrots." It was meant to be.

The question to my mind was, why get married in Grays River and why buy a house on Ingalls Road in Skamakowa? They had been hiking for three weeks on Mount Baker, the Columbia gorge, and the Pacific Crest trail near Mount Hood and loved the area and wanted to live near an area they could explore. Ron is going to retire in January after 33 years as a tool maker for Boeing, and Laura will be retiring from Kitsap County as an administrative assistant for public works. As fate would have it, they ended up on SR 4 and stopped for lunch at Duffy's Irish Pub, and to Laura, this was the place where they would get married after dating for a year and a half.

The other surprise of the day is that it did not rain until well after the ceremony. Meserve Park was a perfect setting for these modern day pioneers who may have started a trend. I did meet many wonderful people who drove up to four hours for this special occasion only to drive back later. Lorraine Schroeder, an ordained minister of the Universal Life Church, performed a wonderful traditional Celtic wedding with the tying the knot ceremony called "hand-fasting." In old Ireland as well as Scotland, a couple would literally have their hands tied together with a cord which was just one of many ancient Celtic marriage forms permitted under the Irish Brehon Law. The couple who came together for the hand-fasting agreed to stay together for a specific period of time. Usually it was a year and a day. After the end of the year, the couple could enter into a permanent contract or go their separate ways.

The public was surprised by the music played by a Portland based band called Saint James Gate. The smile on the faces of strangers as they ate a variety of tasty hors d'oeuvres reflected the mood of contentment and awe. The real story is that this newlywed couple are now our new neighbors and friends. What a way to introduce yourself to the community--awesome. When I say community, I also include the wonderful people I have met from Naselle. Ron and Laura welcomed us into their lives. You will be seeing them often in the community. Let's continue to show them what this community is about, friendly.

Another reminder that The Naselle/Grays River Valley Seniors luncheon is held on Wednesdays for those who are 55 and older; also the potluck will be at the Valley Bible Church on every fourth Wednesday. Volunteers are needed so please contact the Naselle/Grays River Valley Seniors' president Diane Hollenbeck at dianemarye@gmail.com or phone her at 1(360) 465-2991. Anyone interested in renting the Rosburg Hall is encouraged to contact Sonja Kruse at 465-2251 or Dee Nikkila at 465-2595. Thursday luncheon at noon at the Rosburg Hall is sponsored by the Community Action Program (CAP) out of Kelso/Longview. Any questions, contact Denise Rae at (360) 425-3430 extension 259. 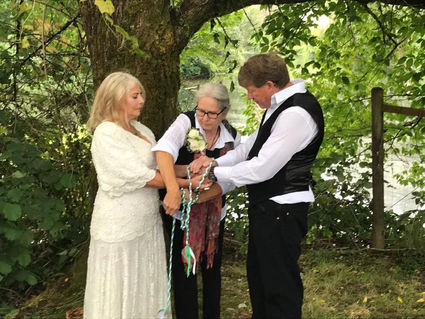 Lorrain Schroeder tying the knot for Ron and Laura Relethford at their Grays River wedding.

If you have been to the Naselle Community Center's past concerts, then you know the new one will be just as great. The Finnish American Folk Festival is sponsoring another concert at the Naselle Community Center, 14 Parpala Road, on Saturday, 6 p.m. Food will be served downstairs after the concert, and donations will be taken at the door to help offset costs for maintenance and upgrades to the building. Performing will be Jennifer Goodenberger on piano and vocalist Phil Keim, a well-known North Coast tenor.

Musicians and singers come to the Grange this Friday, 6 p.m., for the open mic. Sign up is at 5:45 p.m. with a jam session following the open mic. Admission is free, and the coffee is always on. The Grange will hold a garage sale fundraiser on Saturday, 9 a.m. to 3 p.m.