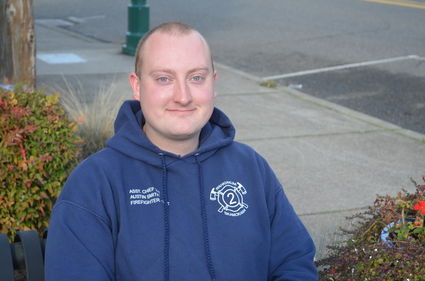 Austin Smith who works for the Wahkiakum Sheriff's Office and is active with two fire departments in the county, has decided to run for the Port 2 Commissioner 2 position.

A position on the board of commissioners for Port District 2 is one of the few contested elections on the Nov. 5 ballot. The position represents the Skamokawa and Grays River area. Incumbent Brian O'Connor is running for re-election, and Austin Smith has also filed for the office. Eagle reporter Diana Zimmerman talked to them about their candidacies.

A native of Naselle and a 2012 graduate of Naselle High School, Smith headed east to Longview to study criminal justice at Lower Columbia College before settling in Skamokawa.

He has spent the last four years with the Wahkiakum County Sheriff's Office, working as a dispatcher and corrections officer. He has volunteered with the Skamokawa Fire Department for several years and is currently the assistant chief. He is also the EMS lieutenant at the Cathlamet Fire Department, with over 150 hours of training to be an EMT, and more recently, he joined Wahkiakum Search and Rescue.

"I really enjoy the fire departments, Smith said. "That's my main hobby, I guess you could say. But I try to stay involved. I want to be involved in the community and that's why I'm doing this as well. I like to stay busy. This is home for me. I think it is important to be as involved as we can."

Smith, who currently lives in Skamokawa, worked at Skamokawa Vista Park while in high school and later, after he graduated.

"I kind of missed it so I thought this was an opportunity to get involved again," he said. "I plan on going to their next meeting to catch up on what is going on. It's close to home, and anything in Skamokawa, I tried to get involved in."

What does he hope to accomplish?

"I'd like to get people more involved in volunteering and get Port 2 noticed some more," Smith said. "I enjoyed working there, it's a great place to stay. I think if we had more outreach maybe we could expand a little bit. I guess just trying to make sure the port is the best that it can be and hopefully I can help contribute to that."

Why vote for Smith?

"I just think I could bring a youthful perspective to things," he said. "I think change in leadership is important after awhile. Even if I were to get it, I think someone should come up after me after awhile, because I'll probably lose touch after some time. I think I could do good work and I'd appreciate anybody's vote."