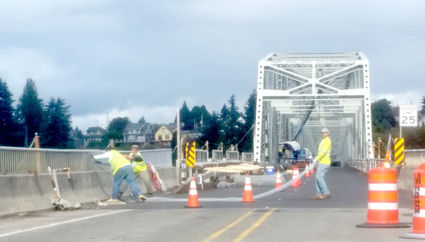 Workers pull chain link fencing from the underside of the Puget Island bridge. The fencing provided footing for paint crews and a structure for containment curtains. The project should be finished by the end of this month, according to the Washington State Department of Transportation.

The end of the road is in sight for the the SR 409 Puget Island Bridge Deck Repair and Replacement project.

"Provided we do not have any weather delays, this project could wrap up before the end of October," Tamara Greenwell, regional communications officer for the Washington State Department of Transportation, said Tuesday.

• Removing suspended scaffolding underneath the bridge,

• Performing final touch-up work on the structure, and

• Cleaning and painting the pedestrian rail.

• Finishing pedestrian rail installation and painting – containment rigging was in place, preventing this work from being done,

Work on the project began in March, 2018, with relocation of an osprey nest originally located on top of the bridge superstructure. A contractor erected a pole and platform along the uncovered concrete portion of the bridge, and ospreys successfully nested there in the summers of 2018 and 2019.

A Puget Island resident, Vicki Bucklin, has suggested that the department maintain the new platform because of the osprey's success there. 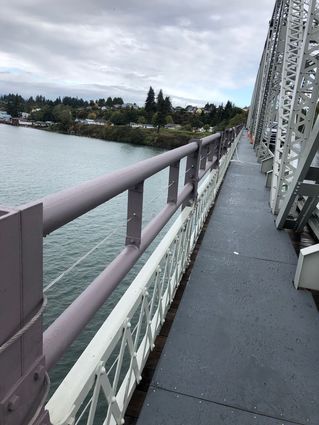 Part of the bridge work included installing a higher guardrail and new surface for the pedestrian walkway.

That possibility is being considered but appears unlikely, according to an email from Joanna Lowery, WSDOT engineer in charge of the project.

"Right now, it looks like our bridge engineers have some serious concerns about the structural loads due to the platform," Lowery said Tuesday. "They also designed the platform to be temporary, so the materials and installation don't currently meet some of the design standards for permanent structures.

"We have a few more things to look into, but it seems most likely that the platform will have to come down."

The painting and repaving project was estimated to cost $17.2 million.

"We appreciate the community's continued patience during the work, and look forward to completion, which will preserve this vital transportation connection for many years to come," Greenwell said.