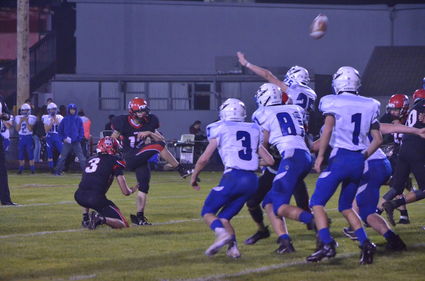 Elijah Cothren, 12, makes the successful point after a touchdown conversion kick that gave the Mules their winning 7-6 margin in last Friday's homecoming football game with Toutle Lake. Jake Leitz, 3, was the holder.

Kicking made the difference as the Wahkiakum Mules claimed a 7-6 victory over the Toutle Lake Ducks last Friday in the Mules' homecoming football game.

After a scoreless first half, the Mules surprised the Ducks with a successful onside kick recovery to start the second half. Jake Leitz put the Mules in scoring position with a long run to the Duck 10-yard line; he scored on the next play to put the Mules up 6-0. Elijah Cothren kicked the conversion for a 7-0 Mule lead. 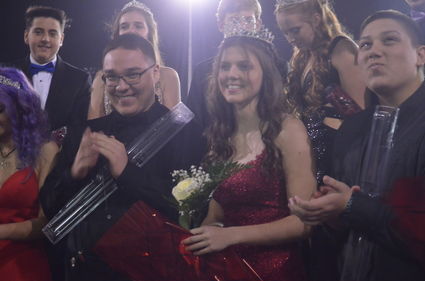 Wahkiakum senior Nai'a Freeman was named the 2019 Homecoming Queen on Friday during half-time of the Wahkiakum-Toutle Lake game, which the Mules won 7-6.

The Ducks put together a scoring drive, and punched in a touchdown early in the fourth quarter. The Mules had good defensive pressure on the conversion kick, and the ball went wide of the goal post, leaving the Mules ahead 7-6.

From there, the Mule defense was able to maintain the winning margin.

The Mules overcame adversity on offense: Starting quarterback Kaden Anderson left the game with an ankle injury on the sixth play of the game; he'll miss the rest of the season. Leitz, a running back, stepped into the quarterback position; center Gabe Moon took over at quarterback for the second half. Leitz was the Mules' leading ball carrier with 73 yards gained; Braxton Johns followed with 22.

The Mules head to Toldeo this Friday.