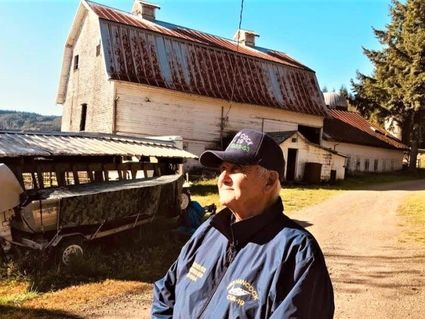 The war in Vietnam was no different than any other war with the exception that when these veterans returned home, there was not a welcoming with a throng of people waving flags and a brass band playing.

This happened to thousands upon thousands of men and women who proudly served our country with honor and distinction. Many of these honorable people went to their graves without ever really getting the recognition they deserved. Thanks to Puget Sound Honor Flight that has changed for some.

I was at the home of Joel Fitts, a 77-year-old Navy veteran who from 1958-1964 was a part of the Pacific 7th Fleet aboard the carrier USS Hancock CVA-19. He talked to me about some of his life experiences, and I listened while he read a written statement of his experience in Washington D.C. and the following is verbatum:

"Maybe one year ago I heard about the honor flight program for vets from all the services including WWII, Korea, and Vietnam. There is an application process which you can access online at Puget Sound Honor Flight.com. In June, I received the call letting me know I had been selected to go on the flight.

"The September flight was the 15th leaving SeaTac on Alaska Airlines 737 to Baltimore. There were 50 vets and 50 guardians along with Puget Sound Honor Flight (PSHF) crew and professional photographers. It was a five hour flight to Baltimore. There was no cost to the vets; however, if you take a family member the cost is $1,000. If you don't have a family member, PSHF will assign one to you to help with whatever. There were 11 WWII vets, 22 Korean war, and the rest of us Vietnam folks.

"Two big fancy buses picked us up at the airport for our ride to the Hilton Hotel. We had a motorcycle escort from American Legion riders. There were 10 Harley-Davidson motorcycles all dressed with Old Glory flapping in the breeze on each one. Our main tour started at 8:30 Saturday morning. We went to all the memorials with the same escort in Washington D.C. Monday we finished up the tour, and the whole day, we had a state patrol escort just to get us through Washington D.C. at rush hour. The food at the Hilton was good. Breakfast buffet and two banquets on Saturday and Sunday evening.

"I don't even think I can even explain how this event touched my heart. There were wheelchairs on the bus for those that needed one, with box lunches on the road trips. My service was in the Pacific in the 7th Fleet aboard the aircraft carrier USS Hancock during the Vietnam conflict. There was a nurse from WWII, She was six days from her 100th birthday. As we traveled around D.C., I think we all had the feeling that all the many men and women from those times that didn't come home were being honored by us veterans also.

"On our return to SeaTac, everyone in the airport stood in two lines as vets walked through; they were waving the American flag and clapping. One small seven-year-old girl came up to me and said, 'Mommy said to give you a hug.' Another woman said, 'You boys weren't welcomed home after the war. That's why we are here tonight.' I cried. I am so proud to be an American. I love my country very much. I am thankful for all the boys I served with and those left behind. Maybe we all need is to spend a little more time in our lives just being thankful for freedom is not free."

Joel wore the USS Hancock jacket his wife bought him the whole trip with the hope he might see someone who also served on the Hancock.On the second night of the banquet Joel asked if he could read a poem, "Take Care of Your Friends." He received great applause.

Joel was born in Evanston, Illinois, and raised in Deerfield. This town was near the Glenview Naval Air Station. All the boys he grew up with joined the Navy, so like his friends, he joined the Navy right out of high school and would spend his entire Naval career on the USS Hancock. After his tenure in the Navy he got married in 1965 to Noreen McIntosh. They have four children: Susie, Joel, Amy, and Genevra. Joel and his wife have lived on their farm in Grays River since 1978. He retired from the dairy life and sold his remaining cows in 1995. He worked for the U.S. Fish and Wildlife for 10 years and since has done road construction. He still resides in Grays River and is still very proud to have served in the Navy and he is definitely proud to be an American.