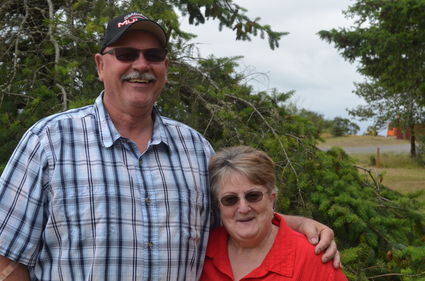 Lee Tischer retires from the Chain Gang--that crew that operate the down and distance markers at Mule football games.

Lee Tischer once witnessed a sad scene at an away football game: An elderly man who volunteered on the sidelines, as a member of what Tischer affectionately calls the Chain Gang, was asked to give up his spot in the middle of the game when the home coach realized the man could not keep up with the offense.

The man walked round the track after, Tischer said, his head hung down.

In the back of his mind, Tischer knew then that he would retire from the Wahkiakum Chain Gang before he ever found himself in a similar situation.

So, last Friday, Tischer ended his final season as a member of the crew; it was time to let someone else step up.

It was about 25 years ago that he first approached Brian and Linda Elliott, who ran the crew at the time. He started as a sub but has worked almost every game since 1998.

For several years, he would hand his stick over to another volunteer two minutes before the half and run out and get his car to take some Homecoming Princess around the track. To make his Friday nights even more interesting, Lee and his wife, Diane, would let the kids hang out at their house after the game for Fifth Quarter.

He also took stats during the game, and would go home and type up a story of the game for the players to keep.

"It was busy on a Friday night, but I loved it," Tischer said. "I saw so much good football."

"It's changed so much over the years, from the Andy Wolf era to now," Tischer continued. "Not so much the change of the culture as the amount of kids that turn out or the fans that come to the game. The stands used to be packed and there would be people all the way around the track, watching."

The best part of this volunteer position has been running the down box, which keeps him on the line of scrimmage for every play.

"I loved the view," Tischer said. "In the trenches is where everything happens. It's where the big boys play. They knock the guys out of the way for the running backs to get all the glory. When I played, I was a defensive lineman and linebacker so I loved defense. So I always had my eyes on that part of the game. It was fun doing that."

The chain gang currently works on the same side of the field as the home team, but at one time they walked the length of the field with the visiting team.

"I had so much fun being on the other side, especially when the Mules were winning," Tischer said. "You would just kind of smile as you went by to hear the coaches griping about everything."

One particular memory comes to mind.

"One coach turned to me and said, 'Do you have any idea what I can do? It's the last game of the year and these kids still don't know the play. We've been working on it since August. Do you have a play that we could run?'"

Tischer laughed. "He was joking, but he was so frustrated."

Tischer may not work any more games, but don't be surprised to find him there, supporting the Mules as he has done for so many years.

"I'm sure I'll still be up on the sidelines yelling," Tischer said.