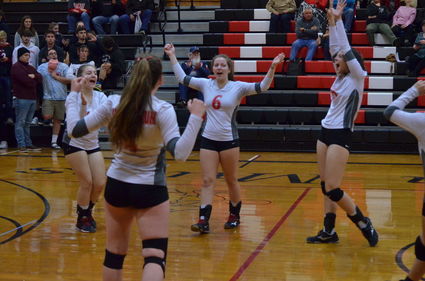 The Lady Mules celebrated a three set win against Winlock in their final home game of the season.

The Wahkiakum Mules volleyball team ended their regular season with a win and began district play on Saturday with two victories.

The Lady Mules faced Kalama in the semifinals on Wednesday, but the score was not available at press time.

If they win, they will secure a place at state and play in the district championship game on Nov. 9 at 4 p.m. at Raymond High School. If they lose, they will be one of four teams vying for the three final spots at the state tournament, playing in two matches in Raymond, beginning at 11:30 a.m.

Watch the Wahkiakum Eagle Sports Report on Facebook for updates.