Bob Saari: At home in the trees 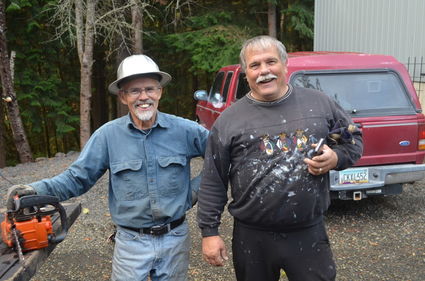 Bob Saari, left, and Richard Schoen pause for a picture before Saari gets back to work and Schoen returns to a prime spot on his deck to watch.

I heard Bob Saari mutter something and turned to find him struggling a bit with a rope he was using while perched in a tree nearby. I had been momentarily distracted by the breathtaking view of the Columbia River flowing far beneath the cliff side property belonging to Richard and Lorielee Schoen in eastern Wahkiakum County where Saari was working. His quiet frustration alerted me to a potential problem, and I suddenly found myself assessing the descent. I felt my stomach drop.

I shouldn't have been concerned. Saari, a seasoned woodsman, knew what he was doing. He was also using two ropes, but I didn't know that at the time.

The Schoens had hired Saari to assess the trees on their property and fall or limb them in preparation for the coming winter months, and as Richard Schoen was quick to point out, his wife Lorielee was a big fan of Saari's work.

It was easy to see why. It was clear that Saari felt at home in the trees.

That might be why some people refer to him as Squirrel, but I wasn't sure he appreciated the moniker when I asked him about it. I won't call him that, but it was an apt description. The way he moved up and down and around those trees, he seemed more at home there than I am with my feet firmly planted on the earth.

Saari's family is from Deep River. He arrived in Rosburg at the age of four and has been there ever since, attending and graduating from Naselle High School. At 19, Saari went to work in the woods and cut timber for quite a few years. He has been doing tree work, like the service he was providing the Schoens, off and on since the 1980s.

It became more of a focus after a tree fell on him 12 years ago.

"It nailed me," Saari said of the tree. "My leg healed up okay, but it's shorter now." 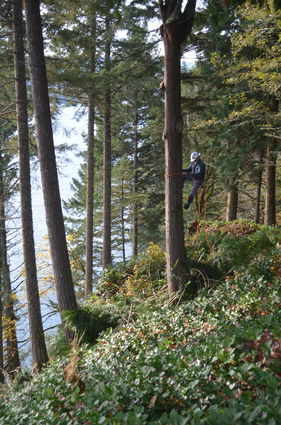 Saari descends a tree after removing some limbs.

Gear and safety are important to his work and he is well prepared. He wears a belt or harness with D rings on the belt, which the ropes latch onto and he wears what he referred to as gaffs or spurs on his feet and lower legs, which have spikes to ensure traction as he moves up and down a tree.

And no, heights don't bother him a bit, not even the added thrill of working on the side of a cliff. The highest he's ever been? He guesses about 225 feet, while picking pine cones from the top of a tree for the Oregon Department of Forestry.

"It doesn't make any difference," Saari said of heights. "It just matters if the tree is solid."