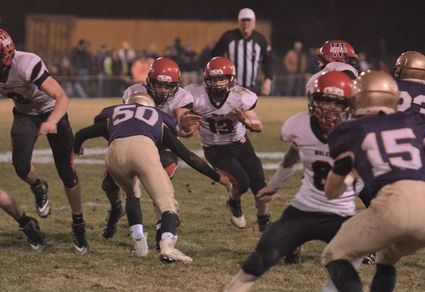 Mule Gabe Moon follows his blockers on a quarterback keeper in the team's 50-0 loss to Onalaska last Friday.

The Wahkiakum Mule's 2019 football season came to an end in a 50-0 loss to top-ranked Onalaska Loggers last Friday night in the opening of the Class 2B football playoffs.

While the Mules lost, Coach Eric Hansen was pleased with the young team's effort.

"Our kids played hard, much better than last week against Winlock," Hansen said. "I was proud of them. They didn't back down."

"We struggled on offense," Hansen said. "Gabe Moon was a tough little nut for the pressure he was under."

On defense, Leitz had 14 tackles and three assists; Eli Moon had 5/3 and Zayne Meneou 3/6.

The Mules lose three seniors--Berry, Meneou and DJ Tow. With a large group of juniors and sophomores moving up, next season could be different.

Onalaska will host Brewster this Friday, 6 p.m., in the opening round of the state Class 2B Playoffs.