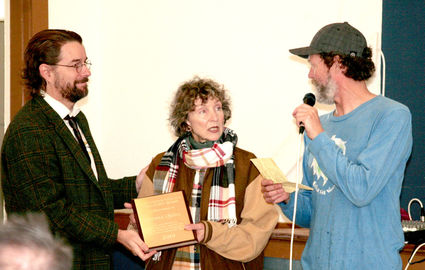 Over 120 members of Coast Community Radio celebrated KMUN and each other during the Annual Meeting and Breakfast held at the First Presbyterian Fellowship Hall in Astoria. Everyone was well fed, volunteers received yearly awards and board members were elected.

KMUN Annual awards were given for outstanding volunteers from the station.

Reid Johnson (Seaside) was honored as Volunteer of the Year.

Last year this board focused on developing a grant-writing team, organizing an endowment through planned giving and putting on events that raise money and awareness for the station.

Coast Community Radio is committed to using radio as an active resource for community development and public access. They seek to involve and establish cooperative efforts among community groups including seniors, women, young people, and ethnic and cultural minorities by providing independent, non-commercial, community radio programs and services for the greater Lower Columbia Pacific Region.