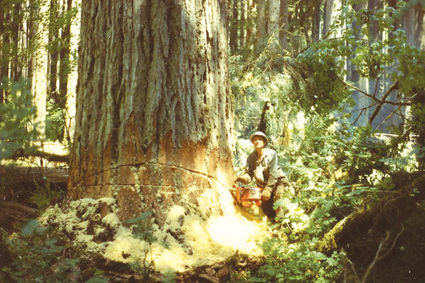 Example of the size of Eden Valley trees over a century ago.

From Crooked Creek to Eden

For the early pioneers coming into Wahkiakum County, the perspective of paradise was to be found in the land. This was to be their little piece of heaven. Around 1875, the only people living on Crooked Creek were Matt Lamby and his brother Joab with his family. Joab cleared the land at the mouth of Crooked Creek all the way to the landing. He was the first to do hand logging. The Foster family was the next early pioneers to move into Crooked Creek and made a trail to their place where later the Sotka family would take over the Foster property in 1885. One of the next families to move to the area was Alex Durrah who made a trail as far as the Olmstead's property. Alex Durrah's intention was to take his cattle to a dry marsh from his place. He formed the first logging camp on Crooked Creek. He had a very large log that was across the creek for a bridge to drive the cattle across and up the hill. It was a five hour trip up and back. One can imagine the wilderness these hearty men and women were taming well over a century ago, and we think we have had a hard life. Around 1880, the first bridge was constructed over Crooked Creek.

In the 1870's trapping beaver and otter was so plentiful that the furs were very valuable to whoever could catch them; however, Alex Durrah and one of the Lamby brothers cut the beaver dam and drained the water out. The area eventually became the ownership of the Juntilla and Olmstead farms.

The first post office was established in 1902 at Crooked Creek. The first postmaster was Karl Utterberg who renamed the valley Eden. These first pioneer settlers received their mail through Knappton then at Stark's Point, then Deep River followed by Oneida. It wasn't until 1887 that a trail was made to Brookfield on the bank of the Columbia River. The mail route from Brookfield to Eden was established by 1902. Initially the first mail through Eden came by Star Route through the Brookfield office. Mail was carried by horseback three times a week by James Ashley and his sons Alden, Roscoe and John. They would sometimes use a horse drawn cart for heavier loads. Before the Star Route, Eden residents took turns to walk all the way to Brookfield to get the weekly mail. This was an all day trek.

By 1903 Emil Ponkala, the second postmaster, added a store to the Post Office. From 1902-05 Eden had a grocery store. You could buy eggs and milk products, but most of the farmers sold their cream in Astoria. Frank Smalley had the store and built a larger one across the road on the river bank.

Eden farmers grew potatoes, hay, various fruits and vegetables. Some of the largest trees in the state were found in Eden Valley with some trees having a base of over nine feet. They would have to wait for the winter freshets to flood the area to be able to haul out these massive logs. Eden Valley at the turn of the last century was about three miles long and averages about a half a mile wide.

In the early 1870's, the first school house was built and only had two families who sent their children to school. They were the Lamby and Nelson families. George Nelson was the first teacher. This was the Eden Valley School District #15. In 1883, the neighbors banded together and bought lumber and built the school themselves. By 1897 another school was built further up the valley on the John Juntilla farm with students attending for six months with an average attendance of twenty. This school lasted until 1938 when the new Rosburg School was established. Charlie Juntilla was a hundred years old when he was interviewed before he passed away, and he said that the first teacher in Eden was a man because "The big boys were hard to handle."

The pristine landscape in Eden Valley is gone forever, but its beauty in no way is diminished. Gone are the schools, stores, and logging, and many memories, but the memories are still waiting to be rediscovered by those who are willing to dig deep. This is by no means a complete exposé of Eden; however, it remains to be seen what future generations will do to keep Eden as a little piece of heaven right in their backyard.

I hope everyone has a very nice Thanksgiving!