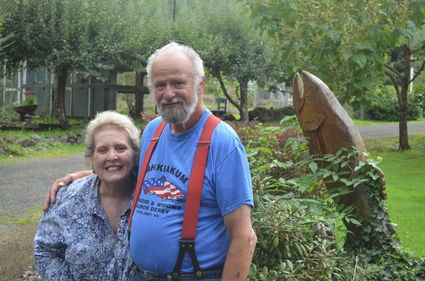 Sharon and Rich Casapulla shared stories about his father, fishing, and life in New Jersey.

Wahkiakum residents Rich and Sharon Casapulla shared stories of his father, Thomas, a trumpet player with ties to big band and vaudeville recently. This is the second installment, where we learn about Rich's early life in New Jersey, and how he met and wooed a young woman a world away.

Rich's parents were secretly married when his father was 17 and his mother was 16. Like the plot of a Shakespearean comedy, she was not allowed to marry before her elder sister. The two carried on like that, with no one ever the wiser. As far as their families and friends ever knew, they married when Thomas Casapulla, Rich's father, finished college.

It was to be a lifelong secret. Rich and his wife, Sharon, only discovered the truth when his mother passed away.

"They were married 60 years," Rich said. "After my mother died, my father couldn't make a cup of tea. He was proud of it, too."

"She stayed at home and did everything while he worked," Sharon said. "But he worked many jobs to keep it that way. They had a good life, because he was ambitious."

Rich and Sharon married young too, just not quite so young.

Rich joined the Army with his buddies, four days after he graduated from high school in 1958, when he was 17. In 1959, he was stationed at Fairchild Air Force Base near Spokane, working at two of the four Nike Missile Sites that had been set up to defend the base.

During his down time, the city boy liked to do a little fishing, which he first enjoyed as a young boy at a small pond in New Jersey.

"My little brother and I would walk to that pond and fish it with a hand line," he said. "We didn't catch very many. I had a cousin who would take us trout fishing. They had a really good trout fishing program. They would plant the major trout streams on Friday, so every Saturday was like opening day. That's how I started fishing."

Sharon grew up on a farm near Espanola, outside Medical Lake, and Rich liked to fish at a creek that ran through their property.

"I caught some beautiful fish out of that creek," Rich said.

"That's how I met her," Rich said, smiling at the memory. "I saw this good looking blonde go through the barnyard."

"I thought it was time to get caught," he chuckled.

"I met her brother and worked my way up to the house," he said, laughing again.

"It was my senior year of high school,"Sharon remembered. "My mom was praying I wouldn't run off with him. She wanted me to go to school and get some kind of training. So when he left, it was pretty traumatic."

Mom's prayers were answered, but only for a little while.

Two years later, Rich wrote Sharon, and that was about all it took for a small town girl from eastern Washington to find herself in a whole new world, a very urban New Jersey.

And that world sounds like something straight out of a movie.

"They talk about graft and corruption," Sharon said. "Boy let me tell you. It's there. I was raised 'Thou shalt not steal' and all of that other stuff. They sold stolen goods door to door."

"They were hijacking trucks and taking things off the back of those trucks," Sharon said. "When you think that there could be a policeman living in one of those units they visited, it's pretty brazen."

But it was pretty common knowledge back in those days that some of the cops were "on the take."

Sharon remembered a time that a truck carrying televisions broke down. Everyone seemed to know the one policeman who had a couple of the TVs that had conveniently fallen off the back of the truck.

"It was pretty blatant," Sharon said. "I've never seen anything like it."

It was so constant, it must have felt normal, but not everyone participated.

With a hardworking father as a role model, Rich followed suit at a young age. At nine, he got a job setting up pins in a bowling alley on the weekends. He did that until he joined the Army. He also worked at a lamp and clock factory after school.

"It probably kept you out of trouble," Sharon told him.

Because there was no high school in Rochelle Park, New Jersey, where Rich grew up, students were given bus tickets to make their way to the high school in Hackensack, six miles away.

Rich would sell his bus tickets and hitchhike each day. One day, the fellow who picked him up offered him a job setting up stock at a new furniture store.

Rich and his brother took the job without a single discussion about wages.

His father, who was an engineer by day, and a successful trumpet player at night, was livid.

But dad really didn't have much to worry about.

"My father did everything by the book, Rich added. "He was very law abiding and all that stuff."

"They stressed that," Sharon said. "They felt like the mafia were lazy bums. The people talked about it, but the Italian people were really ashamed of them. They were in their lives, all over the place."

Sharon remembered Rich's Aunt Irene, who wanted to have a bakery.

"She saved $3,000, which really was a lot at the time," Sharon said. "She and Uncle Frank found a location and set up the business. She was a good baker, but she needed a pastry person, so she hired this guy. He turned out to be mafioso. He wanted half the business."

"She had saved the money, and she wasn't going to buckle," Sharon added. "They really had a big thing going on there. The guys would come in to the shop and knock over stuff."

Aunt Irene almost had a nervous breakdown and started packing a gun. When the stress got to be too much, she let go of the dream and closed the bakery.

"Hardworking people had no respect for them," Sharon said of the people in the mafia.

Sharon recalled another story she had heard of a local man who had gotten indebted to the mafioso.

"He had problems in his family where he needed money bad," she said. "They told him he didn't need to pay them back, but when the time came, they would ask a favor."

As the story goes, people would later learn from the newspaper just what that favor was. The man had gotten caught while attempting to assassinate a leader in Italy.

Next time: unions, little men who dream of big tattoos, and heading west.