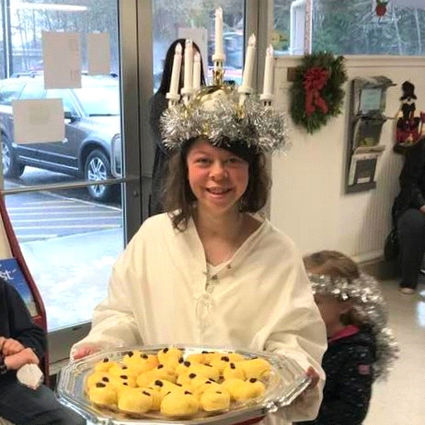 When I first arrived at the Appelo Archives Museum my thoughts were to get photos of Santa and the children and write a few words about the event in Downriver Dispatches and that would be the end of it. As I listened to Anita Raistakka tell the true story of this incredible woman, Santa Lucia, I realized that she was the real story and the celebration of her was like the icing on a wonderful cake. 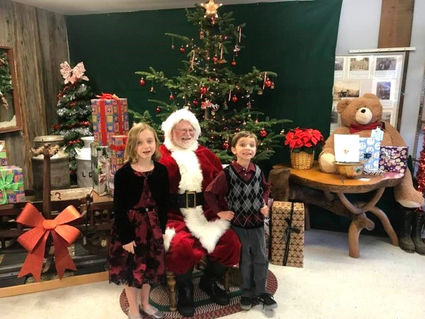 Santa Claus at the Appelo Archives.

The custom of Santa Lucia originated in Sweden and is celebrated in Nordic countries, although Lucia was Sicilian. Saint Lucy's Day, also called the Feast of Saint Lucy, is a Christian feast day celebrated on Dec. 13 commemorating her. She was a third century martyr during the Roman Emperor Diocletian era. According to legend she brought food and aid to Christians hiding in the catacombs. She wore a candle lit wreath to light her way and leave her hands free to carry as much food as possible. She realized the consequences if she got caught. She chose a life of service, not self. Her feast once coincided with the Winter Solstice, the shortest day of the year before calendar reforms, so her feast day has become a Christian festival of light. Falling within the Advent season, Saint Lucy's Day is viewed as an event signaling the arrival of Christmas pointing to the arrival of the Light of Christ.

The celebration at Appelo Archives was to share it with the community, but it was very special for one person in particular. Theresa Bakken was chosen years ago as the Santa Lucia from Seattle, and this allowed her to travel to Stockholm, Sweden, to be a part of their event. All the attendees who were Santa Lucia in their city had a riding escort with their own open horse drawn carriage. They all wore the white dresses with red sashes and candle wreathes upon their heads. This year's chosen one in Naselle was 17-year- old Addie Wielenga.

My sister Theresa Appelo Bakken won a trip to Stockholm as a Lucia Bride in 1969. Made the Seattle papers.