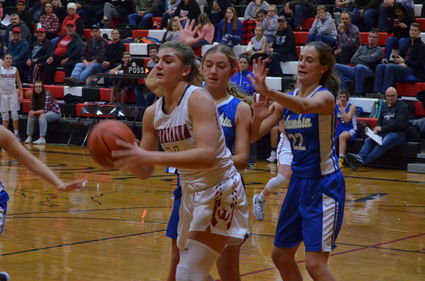 With two defenders behind her, Jansi Merz, who scored 28 against Columbia Adventist, sent the ball back out to a teammate.

Jansi Merz scored 28 points in the Lady Mules' decisive 67-12 win against Columbia Adventist in their season opener at home on Wednesday.

"I thought it was a great first game," Coach Rob Garrett said. "The energy was awesome and everyone was checked in. Defensively, the girls were flying around and offensively, everyone was playing very unselfish. Jansi had a great night, starting things off with 18 in the first quarter and playing with great confidence. I thought Paige did exactly what we have been asking all of our players to do. Let the little things roll off your back, provide great energy, work as hard as you can on defense, and let the rest of the game just come to you. She kept the girls focused and had some phenomenal passes. All around great team win with everyone doing their job and being excited for their teammates."

On Friday, the Lady Mules managed to eke out an overtime win in Onalaska, 46-39. 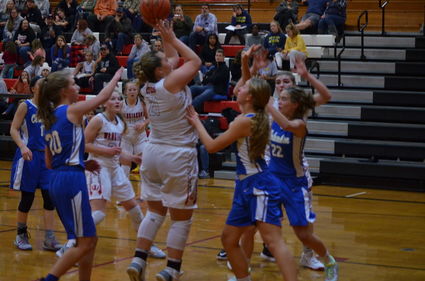 Alexzandria Watkins posted up for two points in the Lady Mules' 67-12 win against Columbia Adventist.

"Onalaska played a great game, and we weren't ready," Coach Garrett said. "I think it was an eye opener for us and it was also some great experience for a lot of young players to play in a great environment with a lot of pressure down the stretch. We had some people step up big and make some huge plays down the stretch to get us to overtime. Once we got to overtime we knew it was our game. Only thing you can do with a game like that is learn from it and use it as motivation."

The Lady Mules hosted Mossyrock yesterday (Wednesday). Ridgefield comes to WHS on Monday and LaConnor on Wednesday, varsity only at 4 p.m. with boys varsity to follow at 6 p.m.