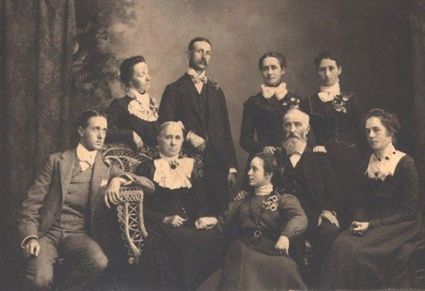 James and Martha Smalley's 50th Wedding Anniversary in 1900 with seven of their nine children. Frank is in the back and Edna is to his right. Joseph and Mary were deceased.

This is by no means a complete story of this strong pioneer family, but will serve to illustrate the depths of love this family endured never knowing that their name would echo in history. This story has its roots in England and Ireland, yet continues this day in Wahkiakum County. I would like to say a specific thanks to Bonnie LaDoe, an 82 year old native Portlander and Grays River wannabe, who provided me with many photos and information that helped me in researching this story. Frank Smalley was her great-grand uncle and his oldest sister Edna Smalley was her great grandmother. After doing research of the Smalley family, I was equally impressed with this family as I have been with stories of previous families, also with the addition that this family humbly served this community for generations without ever knowing how their loving service would impact this present generation.

The story begins with James Andrew Smalley (1828-1920) and his wife Martha Ann Magan (1835-1912). The Smalley name is of English origin roughly meaning a narrow clearing in a wood. There has been some discrepancy as to whether Martha's surname was McGann or Magan. Most records indicate the name was Magan. In either case both names originated in Northern Ireland.

Not much is known of James Smalley's early days; however, his friends referred to him as "Kentucky Jim." He was from either Mason or Boone County, Kentucky. Martha on the other hand lost her parents at an early age and was raised by her aunt and uncle. She was born in Missouri and crossed the plains with her aunt and uncle at the age of 14 in 1849 to California and about a year later she married James on July 11, 1850. James and Martha went to Oregon to take up a donation claim and stayed until the autumn of 1857 when they decided to move back to Missouri by way of ship around Cape Horn. Why they moved so much is a mystery. In 1865 they took a team of oxen and settled in Oregon about 10 miles from Portland. They resided there until the fall of 1871 when they moved down river to Astoria and crossed the Columbia River in a wooden scow. This was the only river transportation at the time. They went up Deep River and settled on Salmon Creek. They lived there two years and moved to Harrington's Point about a half mile west of Altoona on the Columbia River. From there they moved to Rocky Point north of Kelso where Martha lived the rest of her life until she passed away at the age of 76 on June 17, 1912.

The impression Martha Ann Magan Smalley would have on others is evident in her children. Having lost parents at a young age would devastate anyone, but it must have instilled in her an independent spirit that understood that if she wanted anything done she would have to do it herself. I know this is conjecture, but this young child grew up way too fast for any era. It was not uncommon in the 18th and 19th centuries for women to get married as young as 13. She wasn't even yet 15 years old when she married James who was 22. James was her ticket to a new freedom where she could make a difference with her new love. A close look at their 50th wedding anniversary picture shows that this family prospered very well. Martha was 64 when the picture was taken and she would live another 12 years.

This family would have intended to pass the patriarchal reins to their oldest son Joseph; however, Joseph would never have that chance. He was accidently shot and killed in 1885 at the young age of 25. Although Frank was the fourth oldest child, he would later become that family patriarch and influence the community in his own way. This family's influence would continue through their children and especially Frank who would serve the Eden valley community and Wahkiakum County his entire life. 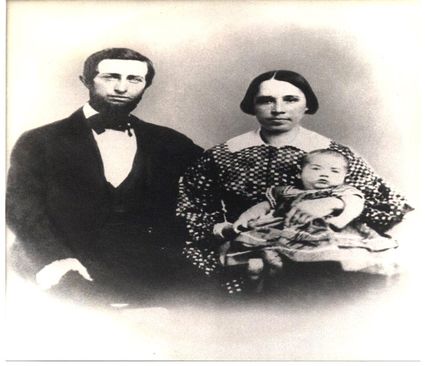 Four Naselle-Grays River Valley High School knowledge bowl teams participated in an ESD 113 knowledge bowl meet at Grays Harbor College in Aberdeen on Dec. 6. They competed against 40 other teams from Montesano, Elma, Ocosta, Hoquiam, South Bend, Raymond, North Beach, North River, and Wishkah Valley (in total--44 teams competed in this meet). At the end of the written round and four round robin oral rounds, Naselle's Monte and the Pythons was in first place, five points above the second place team from Montesano and 24 points above the third place team from Ocosta. Monte and the Pythons competed against these two teams in a championship round and finished third. Monte and the Pythons consist of captain Monte Schell, Travis Popkin, John D'Agostino and Cooper Miller. The team called Scott's Tots finished 13th overall at the end of the day and was comprised of Jack D'Agostino, Josh Chadwick, Riley Thorsen, Theron Frame, and Ryan Waltemate. Naselle Goop Squad finished 23rd overall and consisted of Brayden Colombo, Owen Matthews, Nasir Harris, Malcolm Schell and Haley Eastham. Naselle's Hoops I Did It Again finished in 31st place and was comprised of Emma Colombo, Kylee and Brynn Tarabochia, Courtney Paul and Mia Watson. Naselle's teams will next compete in a third and final regular season meet to be held at GHC on Jan. 10. Monte and the Pythons will later compete at a regional meet in early February for a chance to qualify for the state meet in March; they placed sixth last year at state.