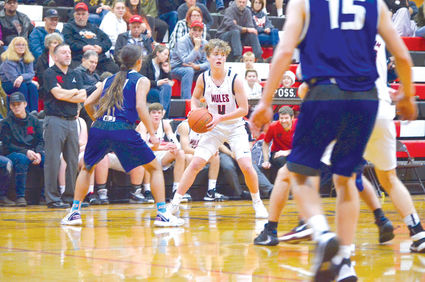 "I thought we played with good energy on both ends of the floor," Coach Todd Souvenir said. "We had a lot of fun and shared the ball, which led to good looks."

"We got off to a rough start with a lot of unforced turnovers, which put us in a hole to start the game, trailing 2-13 at one point," Coach Souvenir said. "We played a much better second quarter and went into the half down by eight. We came out in the second half with energy and quickness on the defensive end, which got us going on the other end. Jake (Leitz) scored nine of his 17 points in the third quarter, which opened things up for our shooters in the fourth. We made the extra pass to find the hot shooter, Brodie Avalon, who scored 14 of his 16 in the fourth quarter."

According to Souvenir, the Mules' improvement could be measured in turnovers as the game went on, with eight in the first quarter, three turnovers in the second, and only four in the fourth quarter.

The Mules travel to the east side to compete in the Colton Tourney this Friday and Saturday, and return to regular play on January 3 at home against Napavine. 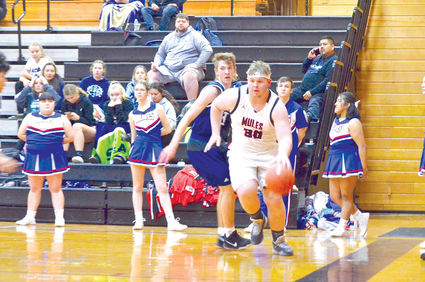 Ashden Niemeyer drove the baseline for two against LaConner last Wednesday. He also had eight rebounds.