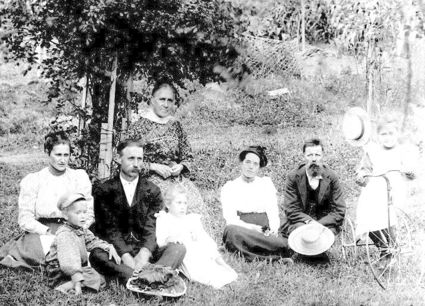 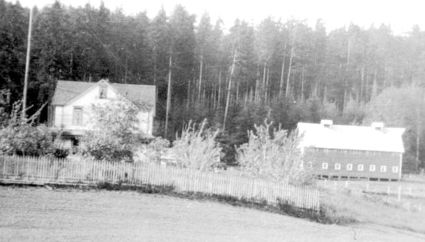 Who was Frank Smalley and why was he so important to this community? The census records up to 1920 state that he was only a farmer. He was more than just a farmer. Newspaper records tell a different story. From The Daily Astorian, Nov. 15, 1907: Frank Smalley, the Frankfort logger disposed of his Young's River interests and will devote himself to the operation of his north shore properties for the future. From the Oregonian, April 5, 1919, for sale: Cafeteria with exclusive rights in one of the livest iron and steel yards in the country, $3300, Frank Smalley, Eden, Wash. From the Oregonian Jan. 22, 1911: A bill of sale was filed today whereby the Colwell-Fowler Logging Company sells its locomotive and all the logging machinery which it has been using at its Tucker Creek camp to Frank Smalley, L. C. McLeod, and C. W. Barr for a consideration of $16,000. The machinery is to be moved to the new camp which Smalley is preparing to start on Grays River. How Frank acquired the wealth in his early years is a mystery: however, the fact remains the same. The people who knew him loved and respected this honorable man.

According to Bonnie LaDoe, "Frank married Mary Matilda Olmsted of Eden Valley on Oct. 3, 1892, and they had nine kids. Many of the Olmsted family lived in Eden and all were Seventh-day Adventists. There are also Olmsteads that live there; different family. I never knew what Frank did for a living exactly, but it says he is a dairy farmer in the 1920 and 30 census. And, of course, he had income from the store and being postmaster for a while. I know he had an early logging operation." You could easily contact Frank at his store in 1915 by phoning him with three short rings. Telephones in the early days were only set up to take one call at a time. It was called a party line because anyone could eavesdrop on your conversation. All this with 20 phones in Eden Valley in 1915-16. He sold not only groceries but also farm tools and machinery.

The impact that Frank Smalley had on this community can be seen through the community's response to his death in his obituary. His active life was that of sacrificing his personal interests to serve his community and Wahkiakum County as best he could. He was President of the Wahkiakum County Pioneer Association; president of the Wahkiakum County Telephone Company; a director of the Federal Farm Loan Association; and of Eden's Community Association. He was a merchant, logger, school director, road supervisor, dairyman, and fisherman. His loss was not only the family's loss, but the community's as well. He was considered a country gentleman by those who knew him. The obituary went on to state that, "We can count on the fingers of one hand the really great people whom we have known. We all know brilliant men and women; men and women who are successful either in a chosen profession or in a financial way, but those things do not constitute real greatness. It is a thing apart, not measured by the yardstick of the world, but reflecting the qualities of God. Such a man was Frank Smalley who passed away recently- a man whose greatness was so unobtrusive that it possibly was unrecognized by those who know him best. He was stalwart as the cliffs by the tempests that beat against them. He was so kind, so gentle, so thoughtful. No words of censure nor criticism ever passed his lips, but he covered his fellow man with a blanket of charity."

This was the man who impacted this community then and now can be viewed through his extended families who still reside in the county today. I have had the opportunity and privilege to talk to a few of Frank's grandchildren who range in age from their 50s to their 80's. Most do not know too much about him because they were either too young to remember or because he died before they were born. The family names of his descendants are many, but if you are related to Frank Smalley in any way, you can be proud to be a part of the Smalley legacy.