Robots, crisis response and flu occupy board of commissioners 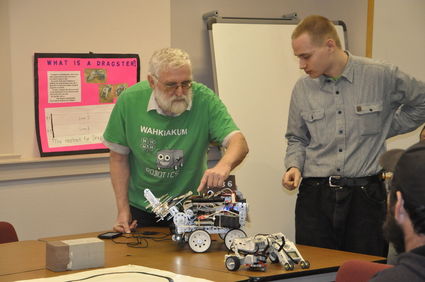 Advisor Ron Wright, left, and a Wahkiakum robotics student explain the operation and construction of a robot designed and built by local students.

Persons attending the Tuesday meeting of the Wahkiakum County Board of Commissioners were in for a treat this week: The board entertained a visit from a robotics demonstration by students participating in school and 4-H club programs.

The meeting did have its serious side with discussions of mental health crisis response and the incidence of influenza in the region.

During the public comment period of the meeting, Elochoman Valley resident Rick Selby said he wanted to mention the state's Involuntary Treatment Act, which is designed to allow families to seek mental health crisis responders when they have a member needing attention.

Chris Bischoff, director of the county's Health and Human Services Department, added that the county program sends a therapist and case manager on crisis calls, but county staff don't have authority to order involuntary treatment. The county contracts with designated crisis responders for that service.

Undersheriff Gary Howell added that sheriff's department officers have authority to order involuntary treatment "for the safety of the person."

Bischoff reported that the flu season is in full swing, with 19 deaths across the state, two children and 17 adults.

He recommended that people have flu shots, if they haven't already done so.

"Most of the deaths are preventable if you have the vaccine," he said. "It's not too late."

Wahkiakum robotics students and advisor Ron Wright demonstrated some of the robots they've constructed and will enter in competitions this year.

Students design and construct the robots and program them to operate. Events range from drag races and sumo battles to construction competition, and in the future possibly drones.

Wright said the students are involved in computer coding, engineering and problem solving. They're also starting to look for real-world applications, such as using their submersible robot to count fish or inspect pipes for local diking districts.

Students are headed to a day-long competition this Saturday at St. Martin's College, Lacey. In March, they'll host a number of schools for a variety of competitions at Wahkiakum High School.