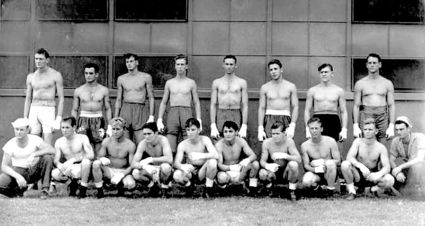 When I was six years old, my brother and I got a Christmas present we would never forget, two pairs of boxing gloves. These red gloves had a white face on the front with the picture of Gene Tunney on one glove and Jack Dempsey on the other. I had no idea at the time that these men were ex-boxing champions and no idea what the gloves were for. We found out real quick. My dad brought all the boys in the neighborhood to try to box each other. It sure was an odd way to find the pecking order.

My dad had a ringside seat at Pearl Harbor on December 7, 1941, and was about 300 yards away from the USS Arizona when it was sunk. This would change his life forever as a man and as a boxer. Those of you who served in the military during World War II often remember boxing teams in each branch of the service. As a boxer my dad had an amateur record of 100 wins and only four losses and he was not their best boxer; however, he later told me the reason for his success was that he was in better shape. These were only three round contests. These venues for boxing were called "smokers" because they were held in rooms filled with cigar and cigarette smoke.

Yeah, my dad taught me how to box, but I never went as far down the same road as he did in the boxing world. I had no idea that the picture below even existed until my dad passed away in 2005 and my older sister gave me the picture. I still miss my dad and I miss his boxing lessons. He still is my hero.

A new year is upon us and there has been a very small increase of people to the area. Those of you who are new to the area may like to know that there is a place to take your trash. The KM Transfer Station is located at the top of the KM Mountain. Make sure you say hello to the new transfer station keeper Lori Smith. Rates are reasonable.

Those new to the area who want to mix with other seniors; go to The Naselle/Grays River Valley Seniors luncheon held on Wednesdays at the Rosburg Hall for those who are 55 and older; also the potluck will be at the Valley Bible Church on every fourth Wednesday. Volunteers are needed so please contact the Naselle/Grays River Valley Seniors' president Diane Hollenbeck at dianemarye@gmail.com or phone her at 1(360) 465-2991. Anyone interested in renting the Rosburg Hall is encouraged to contact Sonja Kruse at 465-2251 or Dee Nikkila at 465-2595. Thursday luncheon at noon at the Rosburg Hall is sponsored by the Community Action Program (CAP) out of Kelso/Longview. Any questions, contact Denise Rae at (360) 425-3430 extension 259.

Those of you who appreciate what artists paint will love to come to the art show at the Grays River Grange #124. The show this Saturday will run from 12-4 p.m. Local artists involved are Noreen Fitts, Gail Wahlstrom, Krsto Novoselic and Carol Ervest. You will see paintings of landscapes and flowers as well as other artworks. For further information, please call Susan at 465-2911. It is my understanding that this is not a Grange sponsored event, but the Grange has been rented for the event.

As many of you may well know Johnson Park is in need of board members to help with the organizing and planning of events as well as upkeep of the facility. Let's help keep this local icon on the map. New cameras have been installed at Johnson Park for security. These cameras see everyone who comes and goes from the facility and who drives through the parking lot. If you have an event that requires a large building then this is the place. Not only is there a gymnasium, but also a very large cafeteria for luncheons or dinners. Also the West End Food Pantry at Johnson Park is open every Thursday from 1-5 p.m. The food is at no charge. Contact Shonda Ware at 360-465-2722 or Toni Fest at 360-465-2393.

This is the place to see and enjoy. The Appelo Archives Center is dedicated to encouraging the study of region-wide history by preserving historical collections, sponsoring cultural activities, facilitating genealogical research, and fostering Scandinavian studies, with an emphasis on Finnish American culture. Your support is much appreciated! They are kicking off their 2020 Archives membership: Individuals $20, Families $30 and seniors $15. For any questions regarding the Archives call 360-484-7103 or check out their website at http://www.appeloarchives.org.

Technology has certainly changed our reading habits with the invention of the internet. Libraries have changed as well to accommodate the community. Not only does the library have books, but family oriented events for all to enjoy. This Saturday, 2-3 p.m., in the meeting room at the Naselle Timberland Library will be your chance to let your children or yourself build their own "Gnome Home." The library is located at 4 Parpala Rd. For more information call the library at 360-484-3877.