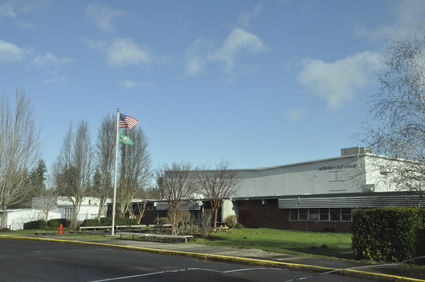 Wahkiakum High School and other buildings in the school district are showing their age, and the district board of directors is asking voters to approve a $28 million bond sale to refurbish and renovate the structures.

Russ Reese and Ron Wright of the Citizens Action Committee joined Wahkiakum School District Superintendent Brent Freeman and School Board Director Shawn Merz on Monday to talk about a bond to remodel the high school that will be on a special ballot in February.

"We're in desperate need of having some work done, mostly focusing on the high school," Freeman started. "We brought in a team of engineers, architects, construction management experts, health experts, code experts. We ended up having them put together an analysis of the facilities we've got, so we could develop courses of action."

The first option was to build a new high school and remodel the grade school, which would cost approximately $65-70 million. The second option would take advantage of existing infrastructure, which the district has taken good care of for the last 60 years, Freeman said, and renovate the facilities, which would cost about $35.4 million.

"We clearly think a remodel is better than a new school," Freeman said. "We've gone out for a bond, which will end up accomplishing this $35.4 million through two funding sources."

One of those funding sources is a state match, which is expected to be $6.7 million dollars, and leaves $28,750,000 to be funded through a bond.

"We chose 22 years for the duration of the loan, because that was the price point that got us the cheapest money for the right amount of time in a bond we could afford with local tax evaluations," Freeman said.

"We could take the entire loan out at one time, but we know we are not going to spend the loan at one time," Freeman said. "We are a small district and we need to keep the school open. We're going to have to continue to make these upgrades while we're here because we don't have secondary facilities. We don't want to send our kids off to another school district because we can't take care of them."

This means a team would have to figure out how to do this during school breaks over a three year period, which might also save the district and possibly the taxpayers a little money.

Ballots will be mailed to voters in the district on Jan. 24 for the special election on Feb. 11.

"This building has been around for quite awhile," Wright said. "We've been about 20 years now that we should have been updating, but we haven't been. We've got another 10 years or so and we've got a real problem. Since the building is in pretty good shape, we can remodel it for $35 million.

"As the building continues to deteriorate, and they can't upgrade it, they are going to have to replace it," Wright said. We can wait, and flatten it and spend $70 million. For me as a taxpayer, it's a good deal now. Let's do it now. Let's take care of this building for another 40 years."

"We've got incredible staff here," he added. "Let's support our staff with a really good facility to continue what they are doing. I don't want to pay more taxes, nobody does, but it is a lot better to do it now than it is to do it later.

Wahkiakum High School was built in 1962 and the first class to graduate was 1965, according to their information. In the 1990s, there was a remodel at the grade school, but there wasn't enough money to address the high school.

The 60 year old roof has only had a little bit of patching on it, according to Freeman, and the district is currently dealing with a roof leak on the north end of the building. A picture taken by a drone shows the condition of the roof and can be viewed on the school's website.

CO2 levels have been tested and found wanting.

"We can do better," Freeman said. "The HVAC system is old and loud and not conducive to education. They are under-performing when it comes to oxygen circulation, fresh air circulation, and noise."

They need safety and security upgrades. Facilities are not ADA compliant, and the fire system is minimal.

Currently there are no sprinklers, there is no integrated fire system to notify the fire department or provide a location of the fire.

"We can't do chemistry experiments in the chem lab," Wright pointed out.

"We have a fantastic science teacher in Jeff Rooklidge..." Freeman started.

"He has to take the kids outside to run the labs that they are able to run in every other school," Wright interjected.

"We don't have the storage facilities to store the chemicals that most other kids in the state are working with, we can't even have on premise, and what we do have can't be done in the classroom," Freeman said. "There aren't even the same safety and security systems in the classroom. There is no wash station, no eye wash station, no shower that is a required piece, no ventilation hoods. A kid that wants to study chemistry in college is stepping into that situation a step behind."

"He's got kids working on all kinds of projects," Wright said. "It's so well run. But the doors are open and cold is coming in and out because there is no ventilation."

"It's amazing what our people are doing with what they have," Wright added.

Those are two examples that are at the extremes, Freeman pointed out, but there are other problems.

The worst rated facility is the weight room, according to Freeman, which is used every class period of the day.

"It's not adequate to have kids out there, and that is a key piece to our athletic program," Freeman said.

Elsewhere, there is asbestos in the flooring. The special education classroom is in a portable.

"We want to add a couple spaces to bring those kids back in here," Freeman said.

There aren't enough bathrooms for the number of students at the school. The plumbing in the chemistry lab is all plugged up. Some of the original hot water heaters are still there and are inefficient. There are drainage issues. The list goes on.

The district spent $13,000 last year to repair their HVAC system. This year, they spent another $22,000 to upgrade, because they needed to keep computer servers cool.

"The implication is that with an upgrade, we won't have the maintenance cost just to keep us struggling along," Wright said.

IT uses closets for equipment.

"We have a 60 year old building putting in 21st century stuff to support what we want to do," Wright said.

An electrical engineer came in recently to help the district get power to their new commercial kitchen/fish processing center. They learned then that they cannot do anything with their current electrical system until they upgrade it. They had to find another way to get power to the new building.

"It's going to be millions of dollars to get the electrical up to speed," Freeman said. "It's not safe and they don't provide the power output. They are extremely inefficient for what we've got."

"This building is going to be a major player when we are hit by a real disaster," Wright said. "We want to be ready."

But that's addressing all the needs. A bond would not only provide a safe space for students to learn, but improve their programs. Rooklidge would be able to teach a state standard chemistry class, students could have a proper Ag shop.

"I would argue that we have one of the best Ag programs, CTE programs in the state, especially for our size," Freeman said. "The efficiency and breadth of learning that we could do when we get this is going to increase."

Right now, robotics education takes place wherever it must, including an old storage space on the second floor of an uninsulated shop, where anyone nearing six feet would hit their head on the ceiling.

"We just competed against 3A and 4A schools in a robotics tournament and got one of eight trophies, Freeman said. We'd like a dedicated space for robotics. A new facility is not going to make us do worse."

While 85 percent of the work needs to be done at the high school, K-8 needs to be addressed as well. Special education. HVAC. Single pane windows in classrooms combined with boilers that make too much noise to be turned on, Substandard flooring. Plumbing and lighting. The cost of an on demand hot water system.

"We're going off the report," Freeman said. "These aren't things that we like or want or are emotional about."

"Every year you are going to have a 5.5 percent increase in labor and materials," Reese said. "Historically it was only three percent. We just continue to add cost to the tax payer by moving this down the road."

"Your costs don't go down by choosing not to do it," Freeman said. "They do just the opposite."

For now, the district looks for efficiencies by working with the PUD on rebate programs, as well as other partners where they find them, but they fear that won't be enough in the long run.

"The building has a soul, we don't want to lose that," Freeman said of the high school. "The people aren't seeing the asbestos in the floor, the electrical problem, the backed up toilets. Just like an old car, no matter how much you love it, at some point you have to take care of it. We've passed that point. There are things here that are at the end of their lives."