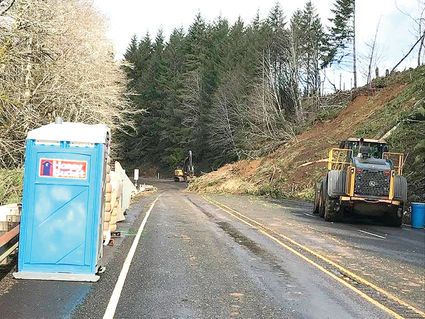 Crews working to clear the slide blocking SR 4 on KM Mountain are making progress removing trees and debris. The timeline for reopening the highway is still unknown.

"All of the soggy debris is behaving well under all the rain. It is surprisingly more stable than we thought it might be. Crews are planning to get safety barrier in place on Thursday. It is still too soon to say when we can reopen the highway, but we are hoping for some time next week.

"The trees and rootwads from the slide are being taken to the Lower Columbia Fish Enhancement Group for use in their projects. Their website is here: https://www.lcfeg.org/.

The Washington State Department of Transportation (WSDOT) hopes to be able to open one lane of traffic by the slide blocking SR 4 on KM Mountain by next Wednesday at the latest.

A 300-foot long slide dumped dirt, rocks and trees on the highway just up the east side of KM on Jan. 27. WSDOT has hired a contractor to remove the debris and open one lane to traffic while planning and executing a permanent repair to the slide.

On Tuesday, crews hauled the remaining trees off the landslide. Work to remove the nearly 50,000 cubic yards of mud and rocks began yesterday (Wednesday).

"With up to 3 inches of rain in the forecast, heavy rain could continue to delay cleanup efforts," WSDOT Regional Communications Manager Tamara Greenwell said in a Tuesday afternoon news release. "The timeline for reopening the highway is still unknown.

"As we remove debris, we can assess how the slide behaves, which will help inform when we can install a safety barrier and open a single-lane of the highway."

When the debris is removed, engineering geologists will start drilling into the hillside to collect rock samples, to further assess the slide and help develop a long-term fix, Greenwell said.

The contractor has cleared a lane for transporting material to a disposal site, but it isn't screened from the slide and is considered unsafe for the public.

For traffic safety, the contractor will place weighted containers between the slide and the traffic lane.

On Tuesday, Wahkiakum County Emergency Management Director Beau Renfro relayed a report from the WSDOT engineer's office that the anticipated opening of the traffic lane would be Monday, Tuesday or Wednesday of next week.

"It all depends on how the weather treats them," he said.

Meanwhile, county officials are taking steps to deal with the slide and other impacts from the rainy January weather.

The Wahkiakum on the Move transit system has had significant impact, said Health and Human Services Department Manager Chris Bischoff. It is too expensive for drivers, buses and vans to detour via the county ferry and US 30 in Oregon to reach the Westend, he said, so there is no transit service there.

Transit managers have sought cooperation from other agencies without success.

"We talked to Pacific County," Bischoff said. "Their funding prevents them from crossing the county line." 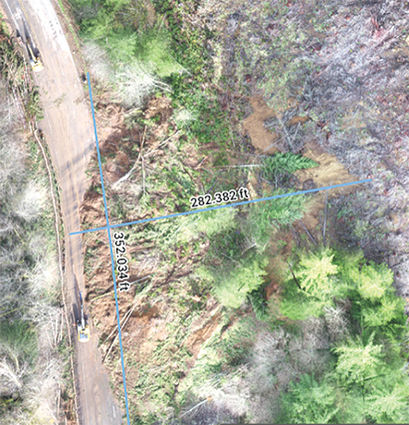 This Washington Department of Transportation photo shows the extent of the slide.

So, this has become a learning experience, Bischoff said. Staff will try to develop a backup plan for the future, but state transit funding doesn't cover the extra expense of sending a driver or vehicle on the detour route through Oregon.

The county board of commissioners on Tuesday adopted a resolution declaring a state of emergency that would allow the county to reclaim expenses used to respond to slides on county roads or similar events.

Commissioners also signed an agreement calling for WSDOT to reimburse the county for 24-hour ferry service while the highway is closed at $140 per trip.