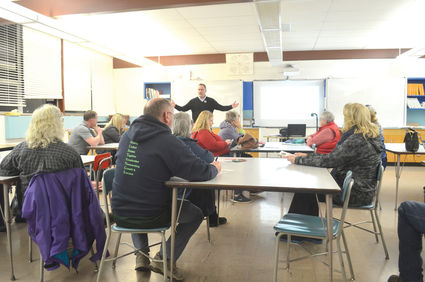 Superintendent Brent Freeman addressed about 30 people at a meeting about the bond to remodel Wahkiakum High School last Wednesday.

There were two courses of action when they began this process last April, Freeman started. One was to build a new school. To do so would would mean they had to demolish the old, which include floors containing asbestos. It would be a huge cost altogether, estimated at $65-70 million.

"In the end, we had enough of this building that we felt we didn't need to go throw hundreds of dollars of square foot in, because they're salvageable," Freeman said.

So the projected cost to remodel and expand the existing high school became $35.4 million.

"We brought in experts to help us get there," Freeman said. "The Construction Service Group from ESD 112. Their job is to go around the state and build schools for school districts. They currently have 35 schools they are working on in the state."

"We have chosen to trust them," Freeman said. "I believe they know their business, that they've been doing it for a long time, and that they are trustworthy with their estimates."

Freeman asked them to develop a needs based cost to get the building back up to code and to support educational requirements.

One of many issues at the district, according to Freeman, is that the existing building was designed for about 125 students, but population has increased beyond that. They haven't had a kitchen, and there isn't a purpose built lunchroom.

Students take their noontime meal in open spaces all over the school. Freeman shared an anecdote about a student who was very nearly injured when he accidentally shattered the glass on a trophy case, resting against it while he ate lunch.

Students don't have a chemistry lab, or a physics lab.

"I'm not looking for the Taj Mahal, I want something that is going to be functional," Freeman said. "This is a 60 year old piece of property that has never had any kind of capital assistance."

"We're a commercial property, and buildings get worn down. How many of you remember the Triangle Mall in Longview?" Freeman asked. "How is that looking today? It wore down. It was built the same year that this was built. There was a reason that went away. Because commercial properties don't last if you don't go back and invest in upgrading them."

There are two types of money that go into schools, Freeman noted. There is operating money that comes in annually and pays for things like buses, salaries, toilet paper, whatever you need to run the school. That amount is determined by the number of kids that attend the school.

"When McCleary did the big fix," Freeman said. "We got hurt. We are underfunded for that."

"My facilities budget is zero," he added.

Where the owners of a commercial building like a mall might start setting aside money to fix a roof, he said, schools are not allowed to do that.

"We are not funded for capital until we pass a bond," Freeman said.

Because the tax base in the county cannot support perpetual bonds, Freeman asked CSG to take that into consideration when they came up with costs. Could they imagine a remodel that would last 45 years instead of the standard 30?

"We need to build something that is going to last," Freeman said.

According to Freeman, school construction is a little over $400/square foot right now, and the cost of that is increasing 5.5 percent every year and prevailing wage, which must be paid to construct public buildings, has much to do with the expense.

The district's other partner, bond specialists at Piper Jaffray, worked with the district to come up with the price point.

"I need you to build a plan that is going to give a little bit of flexibility and the last thing I can do in asking this kind of money, is make a mistake," Freeman told them. "I want you to give the most conservative numbers that you can."

"What you are saying is that if it does pass, we all might ultimately end up paying much less?" one person in attendance said.

"What you are saying is that you projected the cost at a higher rate just to be safe, but knowing most likely if we get it to pass, we're going to get a better rate," the same woman asked.

Freeman gave her the affirmative, noting that a year from now he could not give the same guarantee.

Because even the way they do that could help taxpayers in the long run.

Freeman talked about some of the ways the district has been working to save money after the shortfall that came with the McCleary decision.

They consolidated printers, which has saved them money on paper and ink. Historically, they've ordered paper three times a year, but this school year, they recently ordered paper for the first time.

They've been taking advantage of the rebate program offered by the Bonneville Power Administration through the PUD to save on lighting, and grants not only built the new commercial kitchen and fish processing center on the campus, but paid for equipment.

Freeman addressed several questions and concerns over the next hour, including from Mike Beutler of the Puget Island Fire District.

"The school district is just one taxing agency that provides essential services in the county," Beutler said. "It's not the only one that is gasping for air. Our EMS is all volunteer. Our fire is all volunteer. There are many times that people call for an ambulance, and they have to send out multiple tones to get volunteers. Your house could be on fire in two in the afternoon and you might not get any volunteers. There are other services in the county that desperately need a chunk of that $34 million dollars. The fire districts, Puget Island, Skamokawa, they are running apparatus that are nearly 40 years old. Everybody has old equipment in this town. Have you considered the negative impact that a 22 year bond that is going to take $800-$1,500 per taxpayer per year away from everything else that is essential in this county and the way it's going to hamstring anybody that wants to put out a bond for a new firetruck or for providing paramedics within this county?

"Have you considered the damage this is going to be doing to the other essential services in this county?"

"Yes," Freeman replied. "This is a real tough issue. We're a poor county. We have a lot of needs here. I don't have many options. I know what the work load is. I don't know how to get there without this method."

"I would like us to come together as a county and say okay, state, you help us reduce this burden right now on this piece to put more money back out for these other pieces. I think that's achievable," Freeman said. "Schools are state infrastructure. Fund them as state infrastructure."

Freeman has already been asking for help from Washington legislators.

"This county is worth just under $500 million," Freeman said. "So I compared us to Mercer Island, which is slightly smaller than Puget Island."

"That's the community's fight," another attendee agreed, before voicing a few of her own concerns about how this tax would affect people living on low incomes.

But she said, she loved the school, and her kids were happy there.

After the nearly two hour meeting, Freeman offered to provide a tour to anyone who was interested and continued to answer questions as one by one, people began to drift out of the old home economics room and head toward the front doors.