Love of wrestling motivates this coach 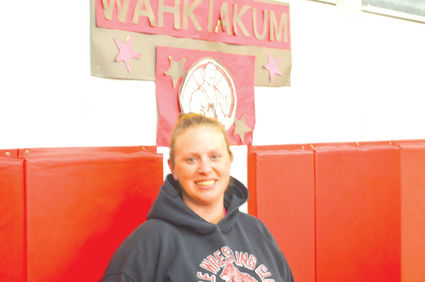 Crystal Davis was the first female wrestler at Wahkiakum High School and is the first woman to be named Head Coach for the Mule Wrestling team.

Joining the team back in the day was her dad's idea. When she tried to tell him it was a boy's sport, he brushed it off.

"That doesn't stop you from doing anything like that," he told her.

"My dad used to rough house with us all the time," Davis said. "He got into a major accident where he lost his foot. He couldn't do what he used to, roughhouse, play around."

Andy Wolf was the coach at WHS at the time. According to Davis, Wolf didn't bat an eye when she told him what she wanted to do.

It was her classmates, the other boys on the wrestling team, to whom she had to prove herself.

She stuck, and won their approval.

"They probably thought I wouldn't last. But they opened their arms to me, and accepted me as a team member," Davis said.

"I love the motivation the sport gave me," Davis said. "But I've always been that kind of person. You tell me I can't do it, I'm going to show you. Even with the career I'm doing now. It's my nature. I work hard. Everything that I do, I have put blood and sweat and tears into."

Davis is also the head coach for the middle school team. Her season starts in October and ends in March. She has been involved in youth wrestling and coached some of the kids that are in high school since they were five years old.

Monday through Friday, she drives a truck. She started out hauling logs, but now she drives a flatbed, from oversize hauls to containers. She follows 9-10 hour days in the week with 2-2.5 hour practices. On Saturdays, she travels to tournaments. Sundays are the only days she has to herself, and she uses that time to clean the home she shares with her husband Dave, and their daughter Makayla. She has another daughter, Trynity, and a son, Trystan, both grown.

"Head coach," Davis said. "It's a great honor to be able to say that, but it's no different than what I was doing before. It's for the kids. I love doing what I do."

"The joy of these kids, they put so much work into wrestling," she said. "It's not just the mat time. They have to worry about what they eat, cutting weight. It's so glorifying as a coach to see...kids who have never stepped on a mat, going to regionals."

"Because they have that drive," Davis continued "To see them be successful in what they are doing. Just the emotions on their face is what keeps me here."

She may be Coach Davis, but the kids call her Mama Crystal.

"It's kind of cool," Davis said. "That's how comfortable they are with me. I'm their coach, but I'm kind of their mom figure. They come to me with their emotional upsets, but they also know I still want the job done."

She loves what wrestling taught her about the sport, but more about life. And she's thrilled to be in a position to pass it on to Wahkiakum youth.

"It's the motivation to want more," Davis said. "Wrestling has taught me to want more and to push harder. I can see even in my life, goals that are just out of reach, but I now have the tools to work harder, and get those goals that I want."

"Having Superintendent Freeman on board, having him help us out, having him be so involved with our program has made a difference to our kids, to our program," Davis said. "He comes in here to tell them congratulations. They feel appreciated and recognized for their sport."