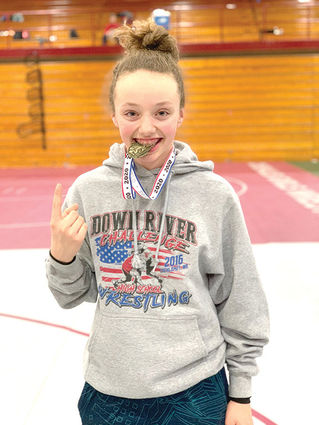 Eighth grader Makayla Davis has been competing against older high school athletes as part of the Wahkiakum Mule wrestling team this year. She is 30-4 this season against boys and girls, and is the first middle school student to qualify for regionals on her own merit.

Wahkiakum Mule wrestlers are moving into regional competition after subdistrict tournaments this weekend.

Eighth grader Makayla Davis, competing in the high school division, took first in her weight class in the girls division, and Jenna Mellis took second place in hers.

The girls head to Kelso on Saturday for regionals, while the boys will compete in Kalama.