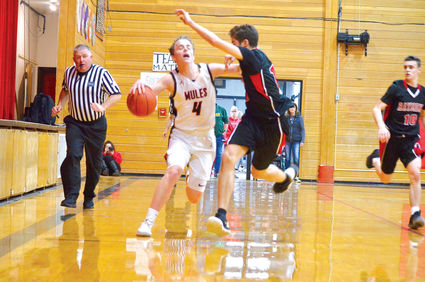 Brody Carlson brought the ball up the court despite this Seagull defender's best efforts in the Mules' 70-62 first round district win against Raymond.

The Wahkiakum Mules boys basketball team beat Raymond 70-62 in front of a home crowd in the first round of the District IV tournament on Tuesday.

Jake Leitz had a huge night inside, posting up and taking advantage of rebounding for second chance points. He had a double double with 30 points and 15 boards. He also had three blocks. Brody Carlson added 14 points. Brodie Avalon had eight points. K.C. Beery scored six points and had five rebounds. Logan LaBerge scored five points and had 10 assists and six rebounds. Beau Rose had five points. Ashden Niemeyer finished the game with two points, two blocks, and eight rebounds. 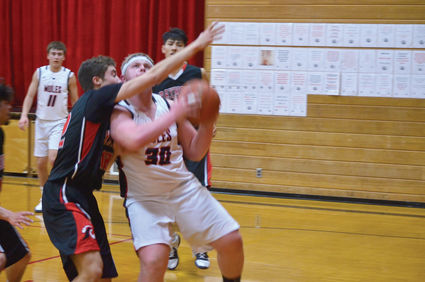 Ashden Niemeyer fought for position in the paint.

"I think tonight was good for us," Coach Todd Souvenir said. "It was fun to play in front of a home crowd. Overall I thought we responded really well and made some clutch free throws and clutch shots down the stretch. Offensively we struggled a little bit from the perimeter. At the same time, Jake's athleticism and the work that he's put in, we gotta use that. With Raymond's size, we wanted to get the ball inside to him and take advantage of that. He had a great game."

"Defensively I thought we did good, but they hit some shots," Souvenir added. "We wanted to keep Tre' Seydel out of the paint and limit him to 20. We knew Seydel was good and could hurt you if he got going. Brody Carlson, defensively, does everything for us. Overall, I thought Brody did a great job and made things difficult for Seydel, who missed some shots at the end. I think he was tired working against Brody."

Seydel, a sophomore for the Seagulls, scored 25 points.

The Mules travel to Rochester tonight (Thursday) to face Northwest Christian at 6 p.m. in the second round of the district tournament.