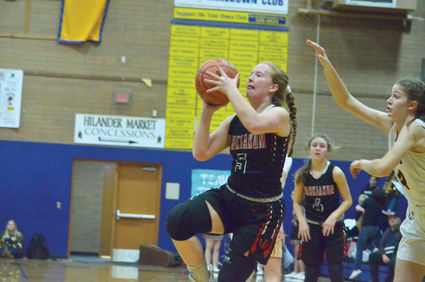 Courtney Carlson scores two for the Wahkiakium Mules on a drive to the basket. The Mules beat Ilwaco 41-38 Tuesday to advance to the Class 2B District Championship game this Saturday.

With two wins this week, the Wahkiakum Mules girls basketball team will be vying for first place in the District IV 2B championship game this Saturday.

They are also headed to the state tournament.

"We're going back to Spokane for the sixth time in a row," Coach Rob Garrett said happily on Tuesday.

"Chief Leschi was fun," Coach Garrett said. "I would say when they beat Toutle, half of my team was honestly scared. Three practices after that, those girls were so mentally tough, they walked into that game knowing they were going to get pushed, slapped, tripped, elbowed, all of it. To handle it with as much class as they did, I'm incredibly proud of them for that."

On Tuesday at Kelso High School, the Lady Mules beat Ilwaco, 41-38, in the district semifinals. 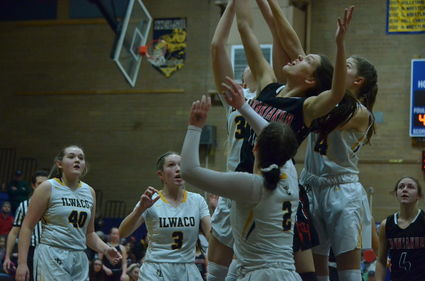 "You've got to give credit to Ilwaco, they battled back," Coach Garrett said. "They never gave up, though basically from the tip we were in control. We just couldn't put them away. We had a lot of good looks, they just didn't go down. We said early in the season we were going to be a defensive team, and that's how we're going to win games. To hold Ilwaco to 38, you've got to be pretty happy with that. We are going to have to win some of our games ugly, because we just don't bury everything. This group will get there because the time they put in at the gym. It's there some nights, and some nights it's not, but the one thing we always know we can do, we can outwork the other team, we can rebound every single time, and we can play physical defense. The girls did that, and that's how we were able to get out of here with a win."

The Lady Mules will face Mossyrock in the district championship game this Saturday at 6 p.m. at W.F. West High School in Chehalis. Both teams will head to regionals, which will be played February 28 and 29.