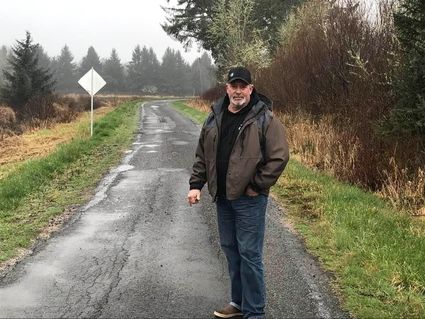 As a relatively new person to the county by local standards, it has been my pleasure to travel the different roads in the area. I have seen some of the maintenance needs on Eden Valley Road, Hull Creek Road, and Shannon Road. They all have their needs, but the one that really stuck out in my mind was Oneida Road. Not that this road was any different, but there were so many spots on Oneida Road that are dangerous to oncoming traffic because the road is not wide enough.

The road has been measured by local Oneida resident Corbett McMaster, and it is between 8' 3" to 10' 3". Most automobiles are about six feet wide, so when two cars approach each other, there is no place to pull off. It is the last mile of Oneida Road that has the biggest needs. In the picture, it appears a little deceiving because it appears that the shoulder is level; however, I have walked along the road and seen the severe drop off there that if one was driving and pulled off the shoulder thinking it was level then they would either get stuck or roll the car over. This is a danger to not only the residents of Oneida Road but to all the hunters and fishermen who frequent this area. Many boat owners have gotten isolated at the end of Oneida Road coming headlong into another fisherman with his boat. What about the school bus that can't back up and can't pull off the road? The grass if not cut can get as much as three feet high and appear to be level with the road.

I had the opportunity to talk to a former county employee who had worked for decades, and he had used a road grader on Oneida Road for 11 years and said there was no reason that a snow plow could not go all the way to the school bus turn around; however, during the last snow we received, the road from the boat launch to the bus turn around was not plowed and the bus could not get to the turn around a mile away, leaving the children waiting alone in the snow. Fortunately a kind neighbor gave them a ride to the bus at the boat launch.

One of the problems I was informed about is that the residual spray program has not been in effect. First the area is mowed and about a week later the grass and broad leaves are sprayed. The residual spray program helps to keep the road clear so that the water will run off easier, but without this program and continued maintenance, the road keeps washing out in places making it even more difficult to travel on the road. McMaster has spent hundreds of dollars of his own money to haul in gravel to fill in pot holes and areas that were completely washed away. About 300 feet from the end of the paved area to the bus turnaround is all gravel. Fortunately he also had a tractor to help. It appears that the squeaky wheel gets the grease. This road at this point is a community hazard waiting to happen. I drove these county roads in the daylight hours. You can't use the excuse that there are too few people living in the area because they pay the same taxes to get the same benefits as everyone else. This is more than a maintenance issue; it is a safety issue for all who travel Oneida Road. What if you were elderly with poor eyesight on a foggy night and an emergency forced you to drive this road at night? It is scary enough during the day.

The first and second items on the agenda coincided with the general concession by those in attendance as well as the commissioners to lower the speed limit through Rosburg to 45 miles per hour (mph) as well as lowering the speed limit through Grays River to 45 mph from Hull Creek Bridge at Grays River Café to Hull Creek Road. Also Johnson Park will have the road leading up to the facility widened to two lane traffic. This will hopefully start this spring at a cost of around six thousand dollars according to Paul Lacy, Wahkiakum County engineer.

Next on the agenda was the problem with one of the five Deep River culverts that collapsed on Wirkkala Road and has left the Nick Nikkila household flooded for months not to mention the effect it has on others in the community. Lacy explained the process involved that would include fish friendly fish gates. The cost is enormous just for the designs at a whopping $175,000. A grant for that kind of money is sent to the Recreation Conservation Office and could take up to two years before anything is started.

Eden Valley has received a grant for $400,000 to raise the road at Eden Lane so the water can flow under the road instead of over it. It will not be available until 2022. Lacy informed us that plans for it will be done this year.

Poul Toftemark, commissioner for the Grays River Habitat Enhancement District addressed the problem of siltation on Grays River and especially Grays Bay. He indicated that the main problem has been caused by the creation of Rice Island just south of Grays Bay by the Army Corp of Engineers dredging of the Columbia River channel and dumping the spoils at its present location. According to Toftemark, the Army Corps of Engineers has acknowledged their responsibility in creating this problem but they say that they do not have the money to correct it.