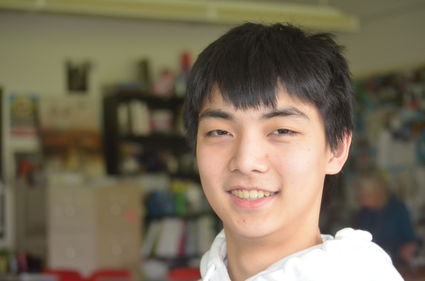 Shuya Takai, a 16 year-old sophomore at Wahkiakum High School decided to participate in an exchange program because he wanted to study English, but as it turns out, he was also curious about the country where he was born.

Takai has lived most of his life in a metropolis: Tokyo, Japan. He was born in California, and has dual citizenship. His older sister, Seika, a flight attendant, spent some of her childhood in the US and speaks English fluently. Young Takai has seen how beneficial those language skills have been for his sister, and sees value in acquiring the skill for himself.

Audrey Petterson and Jeff Rooklidge are Takai's favorite teachers. They are currently reading Harper Lee's To Kill a Mockingbird in Petterson's class and talking about isms, like racism and classism.

"We read books and write essays every week. It's hard every week," Takai said. But he was smiling.

He's studying biology in Rooklidge's classroom, and he says that's difficult too.

But those are his two favorite teachers. It's evident he truly enjoys the challenge.

In Japan, he is required to wear a uniform to school, which he doesn't miss, and students don't change classrooms, the teachers do.

He played football and basketball this year and is looking forward to the next season.

At home, they commit to one sport, and he's been playing club baseball for four years.

His favorite teams are the Hanshin Tigers, the Seattle Mariners, and Los Angeles Angels.

As for hobbies, he likes video games and eating. He is really missing noodles and sushi, but has been enjoying American food, especially burgers, and is developing a love for Mexican food. He likes movies, mentioning in particular the Marvel and Transformer movies.

He still has two more years of high school after he returns to Japan, and he isn't sure what he wants to do after, but he plans to take advantage of his dual citizenship and attend college somewhere in the states.

And right now this highly adaptable young man who can adjust from the big city to the small town isn't missing Tokyo too much, or it's pollution.

"I can see the stars here at night," Takai said. "I like the stars."

Shuya is the son of Akane and Kenji Takai. He is staying with John and NovaLee Knopp in Cathlamet.