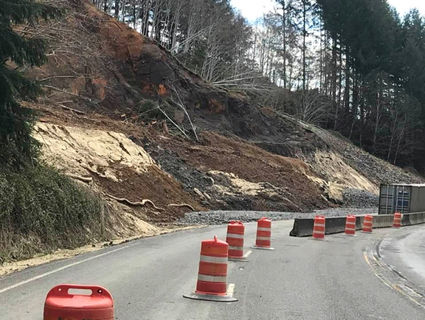 The KM slide is still moving slowly as the Washington State Department of Transportation puts out a call for bids for a summer construction project.

As a citizen of the county I have had the pleasure of traveling and viewing the sights of the county. It is difficult in the rainy season that begins in November and continues through May. This is the period of time that most landslides occur. Many of you, the readers of The Wahkiakum County Eagle, may be surprised to see that the slide on SR4 has slid again a little, and many of you readers have shown a concern as to when this work project on the KM Mountain will be finished. Many assume that the work was stopped because of the corona virus, but that is not the case.

I have been in contact with Tamara Greenwell, the communications manager for the Southwest Region of the Washington State Department of Transportation (WSDOT). She has informed me that they are continuing work to develop an additional construction contract. The project is scheduled to go out to bid in May, and they are planning to select a contractor by the end of June.

The contractor will build the remainder of the buttress, and finalize other stabilization work, such as smoothing out the rest of the slope, removing more loose debris, and seeding the remaining soil. The contractor will also install drain pipes into the slope behind the rock, which will help drain water and relieve some of the pressure that can build up.

Work along the roadway will likely resume in early summer. It is still too soon to tell when both lanes of SR 4 will reopen to traffic. For safety, the alternating single-lane closure will remain in place, around-the-clock until the work is completed.

Although WSDOT won't have a final cost estimate for the second contract, until the project goes to bid, both contracts together (the emergency 30-day contract and the final slope stabilization work contract) are estimated to cost between $1.5 to $2 million. 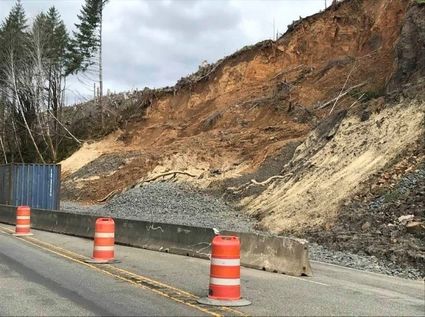 There is no equipment at the site at this time, so it is a waiting period. Although it is down to a single lane, waiting time is only about two minutes going east or west.

Most of the restaurants in the area are closed; however, there are a few that are open and serve food to go only. The grocery stores are open as well as the Rosburg Store and Johnson's One Stop.

Be safe as you travel and be sure to wash your hands frequently when out in public as much as possible. Ride out the storm. This too will pass. I wish everyone the best. Thank you to the readers of The Wahkiakum County Eagle for your continued support of this small, but dignified newspaper. I would also like to thank the faithful readers of Downriver Dispatches for their input for the stories and the inspiration you have graciously given me.