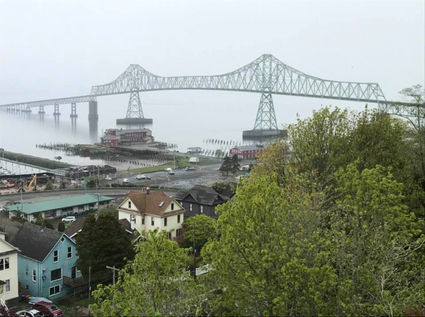 The Astoria-Megler bridge, looking east. Photo by Darrell Alexander, with special thanks to Jeanie Petersen for allowing me to take photos from her deck.

The mouth of the Columbia River was a devious and dangerous place for early explorers. Most exploring the west coast couldn't see it at all, and many who did find it were cautious to enter. Robert Gray successfully navigated the river in 1792. He named it after his ship, Columbia. Although the Columbia River was discovered, it remained a tough place to settle. A small band of American settlers tried to establish a town 40 miles upriver in 1810, but were rapidly discouraged by floods and conflicts with local tribes. John Jacob Astor started Fort Astoria at the mouth of the Columbia in 1811, but abandoned it only two years later.

When the Astoria-Megler Bridge opened on August 27, 1966, roughly 30,000 people came to Astoria to celebrate the occasion. This was a logistical nightmare for the residents and law enforcement of Astoria considering that the population in 1966 was between 10 and 11 thousand. Every motel was filled. The restaurants were overwhelmed and the traffic was at a near standstill. The Astoria-Megler Bridge was built after decades of trudging through the legislative process in both Oregon and Washington. The bridge was meant to replace ferry service that was unproductive and subject to interruptions during bad weather. There was considerable dispute over its construction because of its remote location, and opponents called it a "bridge to nowhere." Shortly after the bridge was dedicated the volume of traffic it carried far exceeded expectations. A two-lane highway steel bridge 28 feet wide consisting of three spans reaching a total length of 21,474 feet and including a main span of 1,232 feet. It was designed by William A. Bugee to withstand Pacific storms with wind speeds that reach nearly 150 miles per hour and river currents that can hit speeds of nine miles per hour. From south to north, the bridge can be approximately divided into three sections. The Astoria approach ramp on the south side of the bridge has the massive continuous main through truss spans, a low-level causeway, and a slightly elevated series of simple span through trusses at the northern or Megler end.

The causeway is the longest section of the bridge, and it creates an unusually long distance between the two truss sections of the bridge. The bridge was named for Washington state legislator Joseph George Megler.

Construction began in 1962 and was completed in 1966. It has an overall length of 4.1 miles and a height of 400 feet. It is the longest continuous through-truss bridge in the world. The cantilever superstructure was built 90 miles upstream and barged to Astoria. There are a total of 48 navigational lights. Nearly 5,000 marine vessels pass under the bridge each year. The cost to build the bridge was $24 million, the equivalent of $189 million today.

For the readers of The Wahkiakum County Eagle, it is important to note that the KM Transfer Station at the top of the KM Mountain is the place where you can take your trash. There are some guidelines you will want to be aware of. The hours of operation are Thursdays and Saturdays from 8 a.m. until 4 p.m. The rates are $4.50 for a single 32 gallon can. Bulk rate per pound is $10 for up to 140 pounds. The cost for trash weighing between 141- 200 pounds is $14 and $3.50 for 50 pounds over 200 pounds. Appliances are charged by the bulk rate and doors from refrigerators must be removed. They do not accept tires, batteries, hazardous waste, dead animals, paint and solvents, asbestos, car bodies, brush or lumber. Waste oil only from personal vehicles is collected at the igloo. Recycle bins are available for newspaper, plastic bottles, glass, aluminum cans, and magazines. For any additional information you can contact Lori Smith at the Transfer Station at 360-465-2554.

Although the Appelo Archives Center and Café is closed due to the covid19 virus, Kelly Shumar, the director, is available to assist the public with any questions or orders. Please feel free to call 360-484-7103 or email at info@appeloarchives.org. See more infromation at http://www.appeloarchives.org.