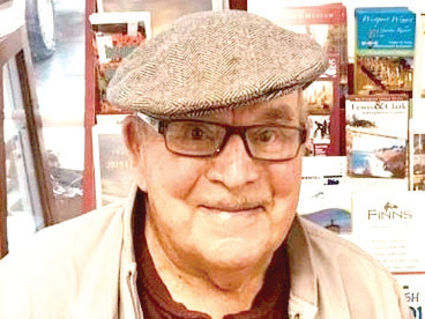 In Remembrance of Edwin Warren Wirkkala

I barely knew Ed Wirkkala, but I did have the honor of speaking with him on several occasions and I was able to interview him at the 9th Annual Loggers' Reunion at the Appelo Archives Center in Naselle. This was a wonderful experience for all who attended, not only for the memories that were shared, but also for a glimpse into the past by then 95 year old Ed Wirkkala. He was part of a time when men went through the school of hard knocks to learn their craft to become teachers themselves to others to continue the dangerous tradition of being a logger. He was also part of an era when they were cutting down the giant trees. It took a different skill to cut these as opposed to the small trees we see today being logged. He was a true pioneer in a way that only those who have worked in the woods understand.

He was also a veteran of World War II with experiences he did not want to share. He told me he saw things that no young man should ever have to see. All veterans like me understand this. Ed passed away on April 30 at 12:34 p.m. at home nearing his 98th birthday with his son Steve at his side. One reason it may be important for some is that Ed was living history at nearly a century of life experiences that have served to be an example that many revere.

Although I barely knew him, he had an impact on me. If that's the case, then how many others out there can attest to how this one man had an influence on others in a very positive way? Those who are related to him and all those who knew him had great respect and admiration for this wonderful man. It is people like him, who by their example, change the world at least where they live. Rest in Peace Ed Wirkkala; you are not forgotten.

On July 19, 1923, Hilma Sofia (Hanson) Wirkkala gave birth to her sixth son, Edwin Warren Wirkkala, at the naval hospital on Whidbey Island. Edwin's father was John Alexander Wirkkala. The Wirkkala family lived in the town of Langley on the island. Ed's father owned a saw mill on the Green River west of Seattle. His father sold the saw mill after he was born to buy a cherry orchard in Mayger, Ore. His dad started logging with his brothers Sam and Oscar in Naselle and Eden Valley as well as Rosburg. Ed's uncle Oscar invented the choker bell which had a big impact on production in the woods and still has an impact today. His family started living in Seal River where his parents spent the rest of their lives. Ed Wirkkala attended the Riverside Grade School in Rosburg and attended Naselle High School. Following graduation in 1942, he went to work in the woods for Brix in Knappton. In 1943 at age 19, World War II was reaching its zenith and he felt obligated to volunteer for the service. He originally wanted to go to flight school but he didn't pass the original test. He would have taken the test again, but didn't have time because they shipped him off to radar school. There were five Wirkkala boys in the service at one point or another during the war: Walt, Ernest, Art, George and Edwin. Art went to the South Pacific as an army radio operator on a landing craft and was involved in several island invasions. George was on a seaplane tender in the South Pacific and got involved in the fighting there. Ernest was a mechanic for P51's. Walt was in the horse cavalry which later evolved into the armored division, but was discharged due to a heart murmur. Ed was part of a mobile radar unit in the European theater. After the war Ed Wirkkala had worked for Weyerhauser from about 1966 until 1983. Ed and his wife Mary were together for 50 years before her passing. During that time they raised four daughters and a son, Dianne, Jan, Connie, Susan and Steve. Special thanks to Nick Nikkila and Steve Wirkkala in assisting me with this story.