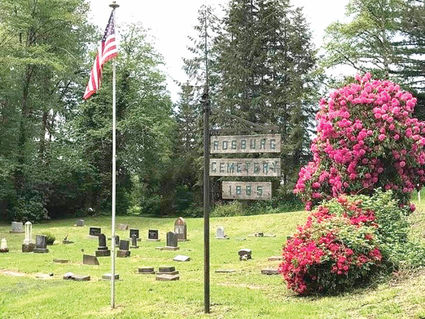 The Rosburg Cemetery is here today because of the gracious donation of the land by the Andresen and Johnson families in the late 19th century. Thanks to Ed Stevens from Ilwaco for mowing the lawns. American Legion Post #111 representative Dale Rose was at the cemetery last Wednesday with his son placing American flags on the graves of deceased veterans. The very first person to be buried there was Asmus Andresen on December 29, 1885. The cemetery is located on the south side of State Route 4 just west of the Rosburg Store.

It was in the mid-17th century that society believed that one should be buried six feet under to prevent infection of the plague. That practice is common today. The majority of cemeteries in Washington State have their origins after 1880. Prior to the Rosburg Cemetery being established, most were buried on their own land. At the old abandoned Walker cemetery there are 12 graves just west of Hull Creek Road near SR4. West Valley has three graves on private land. There is also the Old Grays River Cemetery located on the Burkhalter property.

Early graves may or may not have had a coffin. In the Grays River area most coffins were made of cedar because it was readily available at that time. Many of the early grave markers have disappeared because they were made of cedar and rotted relatively quickly.

Coffins were not mass produced until the American Civil War proved the need for caskets by using them to transport dead soldiers safely and securely. The casket industry has its roots in ancient Egypt and Mesopotamia. The early casket industry in the United States progressed from local furniture and cabinet makers who doubled as undertakers and built the wood caskets as needed.

In the 19th century when people died at home, their funerals would happen at home. A typical middle-class house would have a front parlor and a back parlor. The front parlor was a formal room for special occasions where major family formalities like marriages and funerals took place. The newer cemeteries are called memorial parks. In memorial parks across the country there is a lot less emphasis on death than in older cemeteries. It's mostly on beauty and memory and the living.

Cemeteries built after 1830 were places with winding roads and attractive landscapes. The idea being that you leave behind the world outside the gates and enter where you can reflect. They early 19th century cemeteries were important spaces for recreation as well. People came to have picnics or to hunt. The rural cemeteries were built at a time when there weren't public parks in American cities. Their popularity was such that guidebooks were issued to visitors with all kinds of rules posted.

We rarely see the church yard cemeteries. It was considered unsanitary. The result was that in the 1830s the rural cemetery movement began. This was the beginning of elaborate cemeteries as we see today. Few people go to the cemetery like they did over a century ago. I am glad for those who have volunteered their time and money to keep the Rosburg Cemetery accessible to the public.