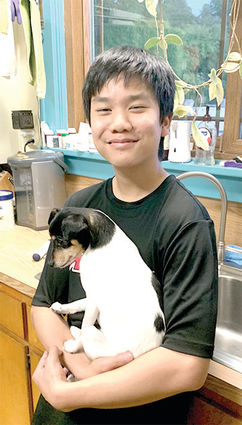 Ifel Natnaphas Chanwharanya, with Thelma, one of six Toy Fox Terriers in John and NovaLee Knopp's home. Ifel is a sophomore exchange student from Bangkok Thailand staying with the Knopps, who have been hosting kids from around the world for 28 years.

If anybody deserves an instant replay, it might be Ifel Natnaphas Chanwharanya.

The 16 year-old sophomore student from Bangkok, the capitol city of Thailand, has had a year. Some of it good, some of it, well, interesting.

But in spite of it all, it sounds like he's had a wonderful time with his host family, John and NovaLee Knopp, and the other exchange student in the house, Shuya Takai from Japan.

"I come here and everything is peaceful," Ifel said. "I love being here."

At home, he's surrounded by towers, and traffic, and noise. It's pretty clear he doesn't miss that, but he does miss the food.

Biology and math were his favorite classes at Wahkiakum High School, and his favorite teachers were Miss Kincaid and Mr. Rooklidge.

Ifel loves sports, so it was natural he would turn out for football, basketball, and baseball while attending high school in the United States.

It just didn't turn out for him.

"I have a caveat for you on his sports," NovaLee said. "Which is now funny."

"When Ifel joined the football team, they didn't have a helmet for him," NovaLee said. "They kept ordering helmets that didn't fit. They finally get him a helmet that does fit, and he's going to get to play in the very last game. On the last day of practice before that game, another kid landed on him and broke his arm."

Needless to say, Ifel never did get any time in a football game. But it was basketball season, and so, hopeful, he was healing as fast as he could. He showed up everyday to support the team, even with his broken arm, sitting on the nearby wrestling mats to watch.

"He got impetigo," NovaLee said. "And it went up his face and up into his eye. He almost went blind. If we hadn't gotten him to the doctor when we did, the doctor said he would have been blind."

Ifel's arm healed, and the impetigo was taken care of, just in time to play one minute of the very last game.

Baseball season was bound to be an improvement.

"We know what happened to baseball," NovaLee said. Everyone laughed.

"He'll have to come back for another year," John said.

The pandemic affected spring sports and a lot of other things, but it may have actually made this experience a little sweeter for Ifel, Shuya, and the Knopps.

"I love being here, we can have more time together," Ifel said. "We play cards, watch movies together, talk. I give Shuya a hard time."

He saw his first eagle. The Knopps and the two boys would drive down to County Line Park frequently to watch all the eagles gathered there. The four went down the Oregon Coast to visit the Tillamook Cheese Factory and get ice cream, and to check out the aquarium in Newport soon after the boys arrived in the states. There was also a trip to Mt. St. Helens, but unfortunately, conditions were not good for viewing the volcano that day.

There are also the Toy Fox Terriers. Ifel has never had a dog, but now he has six.

"When I come downstairs, they bark at me all the time," he said. "I cannot move. But they let me now. I love dogs."

Two weeks of quarantine in a hotel await him when he returns to Thailand. And two more years of school. He hopes to return to the states to attend college and eventually become a dentist.

Why did he participate in the exchange program and does he think others should give it a try?

"I wanted to know about the culture, how people live, what school was like," Ifel said. "I'd seen the movies. I wanted in my life, to experience this."

He absolutely recommends the experience. It's an opportunity to know different cultures, to experience life in a big city or a small town.

Ifel practices Tae Kwon Do, listens to Billie Eilish, and loves video games. He has a younger sister who will turn seven this year. His mom owns her own business in Bangkok, and his dad is an engineer.