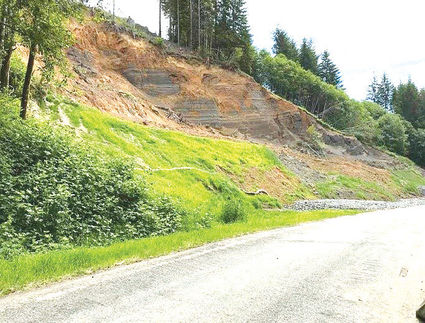 Anyone who has been driving over the KM Mountain is well aware that even though the seeding process was successful, the continuous rainfall has caused the slide to move again. I have been in contact with Tamara Greenwell, the Lead Communicator for the Washington State Department of Transportation (WADOT). She communicated to me that the cleanup efforts are ongoing and going well. Each day crews are hauling out large amounts of debris. WSDOT estimated about 50,000 cubic yards of rocks, soil and dirt slid off KM Mountain from the slide that occurred on January 23.

WSDOT is aware of the additional slide activity, and are monitoring the hillside. Thanks to the drier weather, the slope movement seems to have finally slowed down, at least for now. For safety concerns they are keeping the conex boxes (the big shipping containers) and barrier in place until the final hillside stabilization work is complete and the alternating single-lane closure will remain in place, around-the-clock until the work is completed. Traffic is getting through the lane closure with minimal delay. Due to the additional slide activity, their geotechnical team needed to do additional fieldwork, but safety requirements in place in response to COVID-19 delayed that work. They used a drone to complete several surveys after the first contract (the 30-day emergency contract during which the first phase of work was done) and are using that information to inform the final design of the slope.

Their team is now finishing up the 90 percent design plans this week and they plan to advertise the project (put it out for competitive bid) next month. They expect the project will be substantially complete before the rainy season returns, with two-lane travel along the highway expected to resume prior to the end of the year. WSDOT also appreciates The Wahkiakum County Eagle informing their readers, and the public's patience as they work to stabilize the hillside.

Imagine having to collect rain water for the home in anything large enough to have enough water for the entire family. When the dry season comes along the water has to be trucked in by the local fire department. According to Westend resident Corbett McMaster there are about 20 residents in western Wahkiakum County that are in that same predicament. He said he pays the same taxes as those on Puget Island because he has property on the Columbia River. The area he mentioned covers an area that includes Salmon Creek Road to the Deep River Bridge and also West Deep River Road. It would also include residents on Oneida Road as well as Lassala Road. Corbett McMaster has been in contact with many of his neighbors over this issue and they are perplexed as to what to do next because they do not feel they have been taken seriously by those in the county who make the decisions. This is an issue they will try to talk to county administrators about to resolve as soon as possible. Those who are affected by this have never had water at their homes, many for more than several decades.