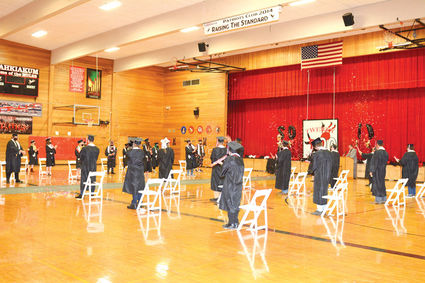 Introducing the Wahkiakum High School Class of 2020. Because of the pandemic, commencement was limited to 50 people or less, and social distancing and masks were all a part of the experience.

The Wahkiakum High School Class of 2020 graduated on Friday. It was a quieter commencement than normal, in a time when gatherings are capped at 50 or less by a pandemic. The event was livestreamed on Youtube, and when it was over, the graduates were not let down by the parade of well wishers as family, friends, and the larger community turned out to celebrate their big day.

The class filed in one and two at a time, sporting face masks emblazoned with a Mule, each taking a seat, set out in socially distant rows.

Valedictorian Nai'a Freeman welcomed everyone in the gym and the people watching at home. She thanked the teachers, coaches, and parents for making her class who they are today, and encouraged future classes to learn from the Class of 2020's experience.

"Enjoy and actively engage in every moment you can at the school," Freeman said.

Go to every game, she said. Go to prom and homecoming. Join any club you want, or start one of your own.

"Dr. Seuss once said you are on your own, you know what you know, and you are the ones to decide where to go," she said. "I hope we are all encouraged to take that leap of faith, set strong goals, and become the best people we can be. So this is it, it's our time, Class of 2020, to make an impact. Change the world, environmentally, politically, and socially, and become the people we always aspired to be."

"This could not be what you pictured at the start of your year," teacher Jeff Rooklidge said. "Sometimes life takes us on a wild ride that just doesn't look anything like you expected. You had to be resilient, you had to be tough, you had to stay in the game when your path forward was unclear. You have finished strong and I congratulate you. I strongly believe it's not what you go through that determines your destiny, it's how you respond to life's toughest tests."

"Perseverance is actually an attribute possessed by the entire Class of 2020," teacher Audrey Petterson said. "Historically, you were born just post 9/11, you have not known a world when our nation was not at war. More recently, our world has been rocked by disease, division, and despair. Your lives have had very real challenges. However it is not these challenges that define you, the way you respond does. Continue to persevere, Class of 2020, we are so proud of you."

"Although this year didn't end as we hoped," Principal Stephanie Leitz said before handing out more awards, "I am so grateful for this opportunity to have you, the Class of 2020, back together as a group one last time. Although there was a lot of heartache and disappointment in what has happened, it has also been a time to reflect. Things have slowed down, there has been an opportunity to reevaluate priorities and think about your next steps, to discover your dreams, and to create a path for achieving them. You are ready for your future."

"Today I see 30 superheroes," Superintendent Brent Freeman said before the graduates were announced and they picked up their diplomas. "You are entering a world of uncertainty. I charge each of you to step out into this world, our world, our America and to do great things. You don't need to fly, or have superhuman strength, or to become invisible, or to breathe underwater. Your superpowers are passion, compassion, resilience, tenacity, and courage.

"While all these superpowers are important, none are more so than courage. All superpowers have courage. While your moral compass will sometimes take you down a path that is lonely, it will be your courage, particularly your moral courage that will power you through those lonely and uncertain times. And superheroes, the truly great ones, overcome their fear with great acts of courage."

Elijah Doiron was the final speaker, selected by the faculty and his class. 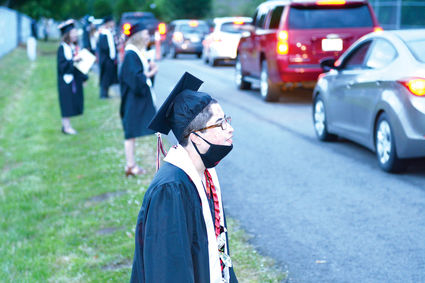 Justin Hoven, and the rest of Wahkiakum High School's Class of 2020, were celebrated by a long parade of well wishers after graduation on Friday.

"It's not just graduation that is messing with me," Doiron said. "it's the whole getting older thing in general. I remember coming into high school as a freshman thinking that by the time I graduate, I'll be so grown up, I'll have everything figured out and I'll be ready to jump out into the world and be an adult. I don't know if I'm just speaking for myself, but I turned 18 on the 9th and I still feel the same as the day I turned 14. I'm just stuck in this limbo wanting to be an adult and not wanting to leave behind what is left of my childhood."

Tassels were turned and the graduates made their way out of the gym, one by one, to Post Malone's Congratulations.

Outside, traffic picked up, and a bevy of vehicles filled the streets near the school, lining up to congratulate the Class of 2020.

The ceremony can be viewed on Youtube, on the Wahkiakum School District's Broadcasting page.