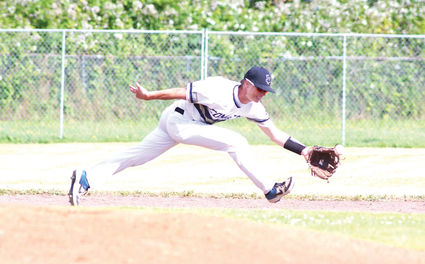 The Lower Columbia Baseball Sr. Babe Ruth team took on Rural Baseball Inc of Winlock in a twi-night doubleheader on Friday evening. Lower Columbia won both contests in an aggressive offensive display, scoring a combined 19 runs in both games which were played at Aiken Field in Astoria.

The winning pitcher for the first game was Dawson Evensen for Lower Columbia. The 6-5 left hander from Clatskanie High school struck out four and allowed only two runs in four innings of work in the first game of the double header against Rural Baseball Inc.

Lower Columbia features players from both Oregon and Washington. Players from schools such as Wahkiakum, Naselle, Astoria, Warrenton and RA Long. Mark Morris, and Clatskanie are featured and engage in games with other teams situated mostly along the I-5 corridor. 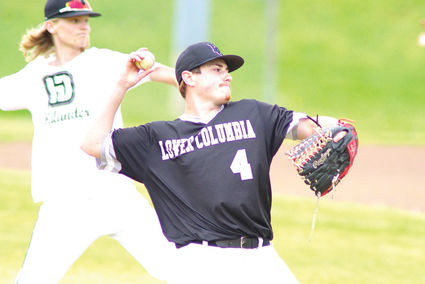 Chance Cothren warms up in pre-game drills on Friday night.

Lower Columbia has had a tremendous season thus far, scoring a total mind blowing 82 runs in just seven games. The names of the local talent for Lower Columbia will be of no surprise for Wahkiakum fans. Former Mule Luke Brown plays centerfield and has been a major offensive contributor for Lower Columbia since they began the season on June 16. Current Wahkiakum multi-sport star Ashden Niemeyer serves as a solid defensive player at first base and brings power to the left side of the plate.

Naselle grad and recently awarded valedictorian Ethan Lindstrom handles the duties at both third base and second base and provides speed on the basepaths.

The Lower Columbia club is 7-0 and will soon travel to Twin Falls, Idaho, for a tournament to be played over the first week of July.

Joe Bair is the head coach of Lower Columbia.