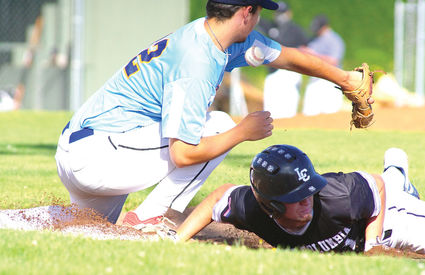 Former Wahkiakum athlete Luke Brown dives back to first base, avoiding a potential pick off.

The Lower Columbia Sr Babe Ruth baseball team travelled once again to Ernie Aiken Field in Astoria, Oregon on Monday afternoon to take on the Vancouver Mavericks. Lower Columbia had just come off a two game split against "The Yard" baseball club of Salem, Ore. The team played both contests at the Salem- Keizer Volcano's stadium in Keizer. Salem- Keizer is the single A minor league affiliate of the San Francisco Giants.

The bats were quiet for the local players on Monday. Ex-Wahkiakum Mule Luke Brown was 0-4, but he was hit by a pitch in early game action. 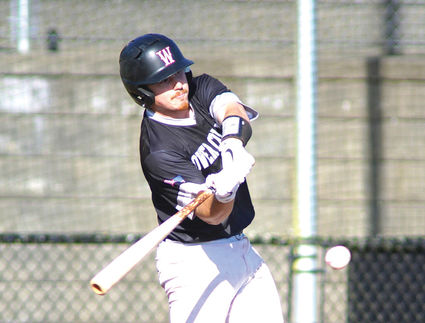 Chance Cothren connects with a line-drive into left center field at Ernie Aiken field in Astoria on Monday night against Vancouver. Cothren is hitting an impressive .306 this season and has driven in 13 r.b.i.'s.

Brown did have a stolen base and scored run to help give Lower Columbia some offense as they scored five runs in the third inning. Brown has been a major contributor offensively this year, earning a batting average of .406 and scoring 24 runs for the season.

Ex-Naselle Comet Ethan Lindstrom, had a marvelous game defensively at second base against Vancouver, which included turning a double play to shut down a threatening Vancouver offense late in the game.

But it was Astoria's Dylan Rush who was the star for Lower Columbia on Monday night. Rush's pitching was the difference as he struck-out seven and only allowed one run through seven innings. He completed the nine inning contest with a win and allowed only three runs total from Vancouver as Lower Columbia went on to defeat the Mavericks 7-3.

Lower Columbia is now 16-4 and will travel to Salem and Bend in Oregon to finish out the season.

Due to recent and ongoing developments with the covid-19 situation, there will be no post season for Lower Columbia as reported by head coach Joe Bair.