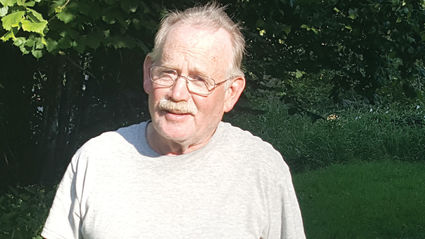 The trade war with China and more recently, covid-19, have sent the scrap metal market into a nosedive. It's not the first time Ben Elkinton has felt the pinch, and he's prepared to tighten his belt for a little while, so long as everyone or every kitty that relies on him still gets fed.

Now if he could just get people to quit leaving cats at his property.

"I've been in this line of work most of my life," Elkinton said. "When I was in high school I got my education working at River Road Auto Wrecking in Puyallup taking cars apart."

In 1987, he was hit by lightning while living in Colorado, and declared unemployable.

"I don't particularly want to sit around, and I'm definitely not going to be a burden on society," Elkinton said. "I can be self employed, and if I forget what I'm supposed to be doing, oh well."

When he relocated to Wahkiakum County that same year, he realized he could do the same thing he'd been doing in Colorado. Recycling.

"I started looking around and I realized that practically every farm had a big pile of junk, old tractors, old equipment, and appliances out in the back," he said. "All the logging roads had dead cars stashed out there. I just started gathering all that stuff up and hauling it into Schnitzer Steel in Portland. I found out I needed a license to haul automotive scrap metal. Any car parts, you have to have a special license for that. I started hauling a lot of junk cars as well as appliances. For quite a few years, I was averaging 750,000 to a million pounds of scrap metal out of this county a year."

"I was doing fairly well, until my truck broke down," Elkinton said. "Then I thought I would buy a new truck. Not too long after I bought it, the price of scrap was $355/ton. I was probably making $700-1000 a day, six days a week. Then suddenly, I haul a load of the best kind of scrap metal into Portland and they say we'll give you $25 a ton, but we don't want any more. Please don't bring anymore."

That lasted a couple years, and shut him down. It feels a lot like what is going on now.

"This whole tariff war, trade war, we've got going on with China knocked the value of scrap metal," Elkinton said. "Last Labor Day weekend, I was getting $135, I could make enough to cover my expenses The following Tuesday it was $50 a ton, since then it's gone down to $35, and I believe it's back up to $40 a ton."

"I haven't been hauling, because all I can do is cover the cost of my fuel to haul it in," he added. "It just doesn't work. But I'm still gathering scrap metal because I assume sooner or later, if you look at what is going on with the economy right now, and this whole stimulus package, $3 trillion pumped into the US over all finances? That's paper money that has nothing behind it and that's a recipe for inflation. Gold is just a squeak under $2,000 an ounce, which is about as high as I've ever seen it. It's not that the gold is more valuable, it's that the dollar is dropping."

That's why he continues to collect.

"I have a self service drop off up the Elochoman at the old Ozment dairy. People still bring me stuff. As a result of not making any income, I've got a couple trucks that are broken down right now, so it's kind of hard for me to pick things up like I used to, but I'm also 73, and not as frisky as I used to be."

When he is able to, he will go out and pick things up, especially from older people who can't get it to him.

He's been trying to pay it forward ever since some kind people helped him following the lightning strike.

"Like that song, he said. "'you can't always get what you want, but if you try sometimes, you just might find, you get what you need.' I have found that to be very true."

One time a guy living in Skamokawa drove a Cadillac to where Elkinton was staying at the time on the island. The man knocked on Elkinton's door apologetically and asked if be took cars.

"This was back when the value of scrap was so low," he said. "I had to charge people to come and get stuff. I couldn't afford even the cost of the fuel to go get it."

That man brought it to him, so Elkinton didn't charge him for transport.

"It was during a time when I personally needed some money, and some guy shows up with a working Cadillac. I made a few bucks."

"I'll provide any service I can, Elkinton said. "I want to be more service oriented than money oriented."

He is still gathering all kinds of metal. If someone is building a house and they have leftover wood still in big enough pieces that someone could use it, Elkinton would take that. In the past, he has accepted household appliances, dishes, and flatware. Not so much to recycle, but if someone needed some of those things, "I would give it to him," Elkinton said. "I still have some of that kind of stuff, though there hasn't been much call for it in a while."

Lately, the only things he's making any money off of are cans and bottles from Oregon.

"I'm too stupid to quit," he said. "I figure if given the fact that the economy is headed toward pretty severe inflation, any physical property, whether it is gold and silver, or recyclable steel, non ferrous metals, like copper, brass, stainless steel, and aluminum, will be more in demand, because it is a tangible physical thing that can be used."

"When you can't find new, you've got to repair what you've got or find someone like me who has a barn full of stuff," Elkinton said.

Thanks for sharing the information with us. I have made great money by junking my old car at Best Price Cash For Car in a very easy, quick, and transparent process. Highly recommend them! Check out here. https://bestpricecashforcar.com/