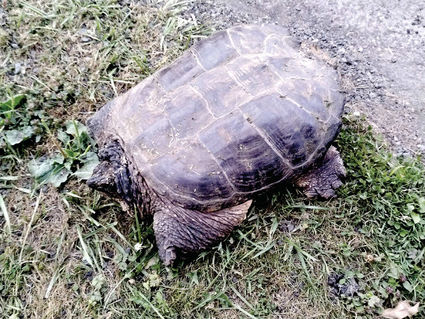 This turtle, about 18 inches long, was found wandering Columbia Street last week. After checking with the Washington Department of Fish and Wildlife, a deputy sheriff released it into a local slough.

On Friday evening, Deputy Billy Conrad of the Wahkiakum County Sheriff's Office was called to Rosedale to deal with a curious wayfarer that had drawn a crowd.

"It looked like a boulder in the road," Deputy Billy Conrad said. "I was not expecting to see a giant snapping turtle."

It was about one and a half feet long, and a foot wide, and was crossing Columbia Street near St. James Family Center. The whole neighborhood had come out to get a good look at the creature, Conrad said.

After taking pictures of the turtle and sending them to the Washington Department of Fish and Wildlife (WDFW), he found out it was a native freshwater turtle, a Chelydra serpentina, more commonly known as a common snapping turtle.

During those brief exchanges with WDFW, Conrad learned that the turtles range from Canada down through Oregon. A couple had been seen recently in the Coal Creek area near Longview.

After getting the okay to release the animal into the water, Conrad learned how much fun it would be to try and move an angry turtle.

It had to be about 35 pounds, Conrad said, and awkward to pick up. Because it did not have enough of a ridge on the top of the shell, he had to be a little more creative. The turtle had a long neck, and Conrad came away with some clawed knuckles.

The turtle got a ride in the back of a patrol car to an undisclosed slough on Puget Island, where it was last seen happily splashing in what Conrad hoped was a more familiar environment.

Update: On Thursday morning, an unidentified man came into The Eagle's office and said the turtle belonged to him and had escaped by climbing over a 4' high fence. The species isn't native to this area and shouldn't have been released into the wild. The man left our office and headed for the sheriff's office.