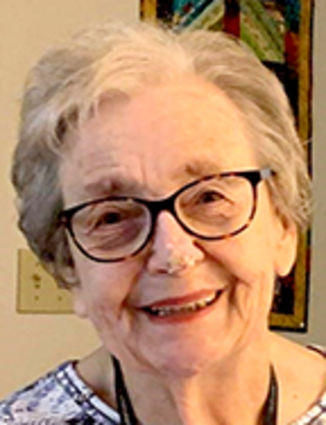 Joan Foster Leonard was born on September 8, 1926 in Chehalis, Washington to J. Bryan Foster and Theresa Maine Running Foster. She attended schools in Oregon and graduated from Milwaukie Union High School in 1944 and Oregon State College in 1948. In 1949, she received a degree in Elementary Education from Southern Oregon College and in 1970 she completed her Masters degree in School Administration at University of Puget Sound.

In November 1950, Joan married Ray Leonard. Joan and Ray had six children: Kevin, Katherine, Melinda, Elizabeth, Stephanie, and Susan. After relocating to Tacoma, WA in 1966, Joan resumed her teaching career with the Federal Way School District where she taught for 23 years. After Ray and Joan's retirement, they purchased a home on Puget Island where they resided part time for fifteen years. In 2005, Joan moved to Norpoint Village in Tacoma, later living at Village Green in Federal Way before moving to West Seattle in 2017.

Joan made friends wherever she went. Her interest and care were genuine. Whether you knew her as a student, a colleague, a friend, a caregiver, a neighbor, or a passing acquaintance, please know she saw your goodness, your potential. You were interesting, worthy, valuable. She wished you the best, worried about you when things were hard, and wanted you to keep going.

Joan passed away peacefully with family at her side on July 16, 2020 in Burien, WA. She was 93 years old. She was buried at Riverview Cemetery in Portland, OR in a small service on July 24th. The family plans to hold a celebration of her life for friends and extended family when it is safe and responsible to do so.

Joan believed in the power of individuals to make the world better through small acts. She was learning, revising, making and doing until her last day with us. Please remember her with an act of kindness or a donation to your local food bank or children's charity.