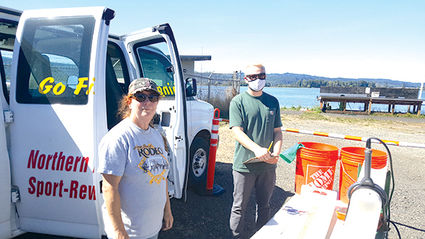 Nancy Campiche, right, turns in her catch of pikeminnow for the day. Josh Boston is one of the revolving Washington Department of Fish and Wildlife employees who help manage the site at the Elochoman Slough Marina. He counts the fish, and then gives Campiche a voucher, which she will later redeem. Fishing has been slow this year, and not just for salmon.

Skamokawa resident Nancy Campiche did not want this story to be about her, but nearly every pikeminnow fisherman I approached on Tuesday said, "Talk to Nancy."

"Pikeminnow are not an invasive species," Campiche said. "They are native. But they eat salmon smolt. When the dam went in, it created a perfect opportunity for them to flourish. Bonneville pays for this program. It was actually a court ordered deal. One scientist told me that if we didn't catch these little guys, they would destroy the river, because they are so hungry."

If you've ever driven through the Elochoman Slough Marina during the summer months and wondered about a van that is usually parked somewhere near the fish cleaning station, it's the pikeminnow station, managed by the Washington Department of Fish and Wildlife. There is someone there every day to register the fishermen, count their catch, and hand out vouchers.

According to Josh Boston, who was working for WDFW on Tuesday, the number of fishermen has been dwindling this season. Usually there are a lot more participating, traveling from all over, but most everyone has gone home early.

Why? Fishing is bad this year.

"The program is working, either that, or else the fish are getting smarter," Yukon John, a fisherman from Montana said.

When I asked him why he was fishing, he simply said, "greed."

"They advertised four years ago that guys made $100,000 a year doing this," he said. "There were one or two guys. The top numbers would go down to $45,000 in the top 20. But now those numbers have all shifted. You've dropped zeros. In some cases we've dropped two zeros, maybe even three."

"The one thing about this fishery, as you go through the several months, if you don't learn to adapt and change, you will go crazy," Yukon John said. "I've fished the entire river system. I know 12 or 14 different ways to fish this river. I've fished with these good guys that showed me their ways and I come back to here, and I've learned another one here. I've stuck with that, because it works here. It doesn't work any other place."

Keith Allen of Aberdeen is probably the number one fisherman at this marina this year, Campiche told me.

Campiche is currently in 12th place in the whole program for catch, which includes participants fishing at stations up and down the Columbia River. Last year she came in 13th place.

"It used to be we'd fish in this slough, and all of us..." Campiche started to say.

"I was with my husband and we were driving through the marina. There was this scraggly looking hippy guy with his beard braided and his pony tail," Campiche said, remembering how she got started. "His name is Montana Bob, and he was fishing out here. We got to yakking with him, because my husband is also a grey beard, hippy looking guy. He said he'd anchored up right out here the day before and got 45 fish. Seriously? I'd just sold my business and retired and I needed something to do. So I said, how do I do that? He said, come down to my boat tonight and I'll show you how to tie a bait loop. I did that. And he took me out the next day and he showed me what he did to catch them. The rest is history. My husband traded an El Camino for a boat, and I had to pay him back full price. I had my own boat from the get go and now I have a better boat."

That's when Campiche became the first female to independently go out on her own and do this seriously.

"I had an advantage," she said, "being a female. All the guys thought that was pretty unique, so they would come over and help me."

One time she was turning in her catch, and came upon a young boy who had only caught one fish. He looked at her and her bucket of fish and said, "Are you Nancy? Oh my god, you're the Goddess of Pikeminnows."

It turns out even goddesses can have bad years. Maybe not as bad as other ordinary mortals, but this has been a slow year for her as well.

There is so much to love about what she's doing. Being out in the river, making some money, interacting with the other fishermen, and the mostly good-natured competitiveness.

"It's solitary, but very social in a way," Campiche said. "We're in a friendly competition with each other, but then there are some guys that come in and blow us all away and we all get cranky about it. We don't like them."

A few minutes later Tom Rapacz of Soap Lake ambled up to the van.

"I got six," Rapacz told Boston. "It beats going home with a black eye."

"I'm a virgin down here, so I'm doing slow," he told me. "Last year I fished the upper rivers, and I ended up getting enough to pay for a boat motor and trailer. So this year I bought a truck and a camper and said well, let's see what it's like down here."

"She's catching them all," he said of Campiche. 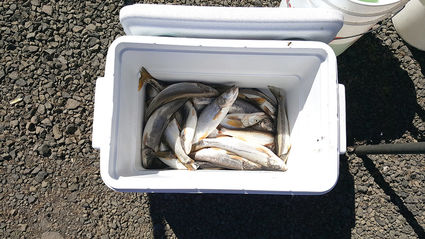 Each pikeminnow nets a fisherman $5, and then a dollar more after they've caught a cumulative 25.

"You have to factor in the cost of fuel, the cost of moorage, and the cost of bait and all that before you consider whether you are going to succeed or not. What I was told the first year, is that the first year will be terrible at it, you'll get frustrated..." Campiche said.

"It's one of the joys of being retired," he said. "When it becomes a job I can quit."

"To me it's a job," Campiche went on. "I'm out here seven days a week. But the next year you start to figure things out. And the third year, you make some money. That has worked for me. I'm on my seventh year, and this is the first year I've gone backward."

"It's not because of me," she added. "It's up and down the river. There is something going on with the fish that we have no control over."

For more information on the program, go to http://www.pikeminnow.org.