Conservation district at work on the Elochoman 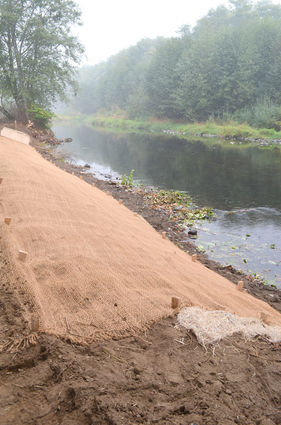 The Cowlitz-Wahkiakum Conservation District is stabilizing the bank, installing deflector jams, and planting trees as part of a project to improve salmon habitat in a section of the Elochoman River.

The Cowlitz and Wahkiakum Conservation District is currently working on a project on the Elochoman River, using log structures for stream restoration and salmon recovery.

District Manager Darin Houpt who studied forest management and water resources at the University of Missouri, and received a Masters in Forest Hydrology at Oregon State University, was overseeing the work being done at the site about four miles up Elochoman Valley Road.

"The real purpose of this project is to establish a stable river channel, and create the habitat along the edges along the river for the fish, Houpt said.

On one side of the river, an Elochoman Valley resident was losing his bank, so this project was beneficial not just to the fish, but to him as well.

"We did a project to put in six medium size jam deflector structures, and then we laid the bank back," Houpt said. "We seeded it, put a straw blanket down as mulch, and then we put the coconut coir fabric over that to hold everything down. Between the jams and the erosion control fabrics, we bought ourselves about five years of time to get the native vegetation re-established there."

Later, they plan to cut native willows off the bar and plant them on the bank, all the way back to the road.

On a neighboring property across the way, the conservation district plans to re-establish an old channel that had been cut off, in order to create a side channel habitat for juvenile fish.

"Hopefully when the fall freshets start, the river will start to rise and reconnect to that," Houpt said. "The idea is that this will stay wet from about October through June and the juveniles will have a place out of the high water to rear, and in the spring they will start their migration out."

Nearby, the red alder that used to line the bank is gone. Property owners were concerned the bank was going to keep moving, and so another part of the project will be to install structures, lay the bank back in, and plant at that location too.

The structures, deflector jams, have two purposes, Houpt said. In the short term they provide habitat gain, each creating a scour pool, a place for adult fish to rest before they make the next run up.

"They will scour a pool in there, and we are hoping that steelhead and coho will utilize that for spawning," he said.

Finally, the crew will plant several tree species at the site, including cedar, hemlock, spruce, red alder, and Douglas fir.

The project is funded by the Washington Coast Restoration Resiliency Initiative, Houpt said, and is one of six projects he has worked on this year.