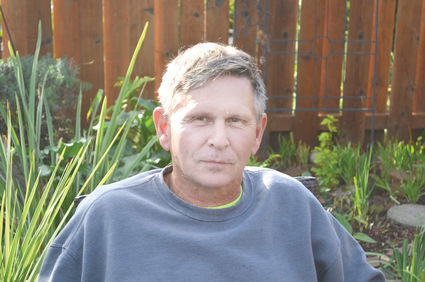 Andy Lea began his duties as the coordinator for the Wahkiakum County Noxious Weed Control Board on July 2.

When the Wahkiakum County Noxious Weed Control Board realized mid-season that they were without a coordinator, they found Andy Lea.

Luckily for them, he grew into the job. Ironically, it has been a bit like a weed.

The season starts in April, and Lea started the job on July 2 and was given 60 days to obtain a state pesticide license. It took him 42 days to become a licensed public operator for the State of Washington.

Three months in, he is already articulate about the work, and why it's important.

Lea has been a Cathlamet resident since 1989. He grew up in Auburn, WA, but his wife, Jackie, the manager of Port 1, was born and raised here.

His father, John, was a councilman in Auburn for 20 years, and his family was raised with a kind of civic mindedness that called them to help out if they wanted to, or could.

That's likely why Lea served two separate terms with the Town of Cathlamet and might have something to do with why he decided to take on this new challenge. That and being outside.

"I've had a variety of jobs in my life," Lea said. "For the past seven years, I've been working in the woods and I have enjoyed it a lot. It was one of my first forays into almost 100 percent outside work. I've done mid-management. I've done retail. This was my first outside experience, in all kinds of weather, in all kinds of conditions you can imagine, and getting up very early."

He will continue to do those things as a forest technician with Hancock Forest Management and Campbell Global, but now he adds the part time work for the weed board.

"So far it's going well," Lea said. "We are trying to salvage the year. I think we've done okay, starting halfway or more through the season. We are hoping to improve the program and make it better going forward."

"The whole invasive species topic is a huge topic in every state, in every country," Lea said. "These plants and animals are coming in and without their own natural predators and controls, they flourish in a new area. The whole topic, even though we don't think about it on a daily basis, it's really huge and it's really growing. That's part of what this program is all about. Trying to keep things natural and native, and to get rid of the plants that don't belong here, that choke out the native plant life or clog the waterways. We don't want those monocultures of just one plant life that doesn't support habitat for animals, or erodes the river banks, and more."

They provide a service from April to October, spraying noxious weeds like Scotch broom and knotweed on private and public properties.

The board hired the coordinator for Cowlitz County, Jennifer Mendoza, to mentor Lea. She has been coming down once a week, and will continue to do so until the end of the year. They go on ride alongs, tackle office work, field surveys, and spray applications.

Lea's grateful to have a back up.

A couple weeks ago he did a project for Diking District #1, and more recently, he was hired by two landowners on Puget Island to come in with the spray rig and tackle blackberry, knotweed, and thistle.

"We do charge them and it's based on time and materials," Lea said. "We also have a cost share program for larger parcels, where the county will reimburse part of the chemical costs."

"I'm only allowed to spray terrestrial at this time, so land based weeds, right of way, like the side of the roads, or agricultural spraying, pastures and farms, fence rows, and around homes if they want it, general farmstead they call it."

As for milfoil, the board has a permit application in with the state and are awaiting approval, Lea said. They have a contractor lined up and will do in water applications in three locations on Puget Island and the Elochoman Marina, which should be completed by December 31, when their permit expires.

The state adopts a noxious weed list each year, and then each county uses that as a resource while they consider local needs to create their own list, Lea said. There are three classes of noxious weeds: Class A are newcomers and eradication is required; Class B are more localized and the philosophy is to hold the line and try to keep them from expanding from certain areas; and finally Class C, which are considered widespread, and are to be controlled if possible.

In the off season, Lea will get settled into the new office, which is now located in the Hope Center in Cathlamet. He will turn his focus to the more administrative side of the job, handling billing, organizing meetings, ordering chemicals, getting quotes for new equipment, and considering outreach for the Noxious Weed Control Board.