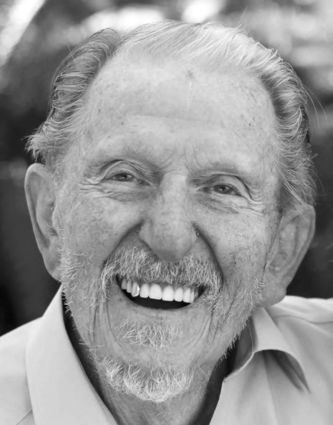 Our dad climbed mountains; one foot in front of the other.

No matter what he encountered in life, he tried the same approach:

To him resting was an insult.

After decades of severe heart and lung complications, and miraculously strong recoveries, he was genuinely bewildered as to why he felt tired and worn out at the age of 92.

On Friday, September 25, 2020, Edward Gaidrich's body defied his spirit and mind. He sat in his easy chair, the day's mail in his lap, and for the final time, he did the thing he fought against his entire life: He rested.

Born in Mt. Braddock, Pennsylvania, on March 3, 1928, to Edward and Anna Gaidrich, Ed (Edgie or Eddy to many) is remembered by his 3 children: Karen (Joel) Anderson, Mona (Monte) Givens, and Edward Paul Gaidrich; his five grandchildren and fifteen great-grandchildren. His wife of 73 years, Elora, passed away in January 2020.

Ed grew up in southwest Pennsylvania, the youngest of nine children born to Polish immigrants. His father died when he was an infant and his mother when he was eight. Two siblings died during the 1918 Spanish Flu pandemic. His older siblings fought to keep the family together and everyone did his part to contribute. But life was hard. The story is told of his sister mixing up the week's bread before school, running home during lunch to punch down the risen dough, and then, after school, baking the loaves. A lifelong regret, Ed left school in the eighth grade. He worked at a variety of jobs and the day he turned eighteen, he enlisted in the US Air Force.

Ed and Elora (Lowry) married in 1946. They eventually followed four of Ed's siblings to the Pacific Northwest, making their home in Aberdeen, Washington. He worked for Harbor Plywood for twelve years and then Rayonier Pulp Mill for 29 more, happily retiring in 1990.

He loved the outdoors and continued his hobby of climbing and hiking with the Grays Harbor Olympians, proudly scaling every major peak in Washington and Oregon. Growing flowers, capturing nature and the smiles of family on film, traveling, talking to friends and strangers on his HAM radio, baking, cooking, and winter motor home trips to Arizona, filled his years.

In 2011, Ed and Elora moved to Rosburg, Washington, his daughter, two granddaughters and 10 of his grandchildren as neighbors. Taking the weekly garbage can run to the end of the road, great-grandchildren sitting in his lap "driving, while the others bounced in the bed of the truck was a major event. Trying new recipes, taking evening "scouting" drives with his son-in-law, watching the Seahawks with his family, feeding "his" birds, mowing the big field, attending Valley Bible Church, salmon and sturgeon fishing, crabbing, clamming, helping with family building projects, and enjoying his friends at Senior Lunch became his new routine. And walks...first to the end of the long driveway to gather the families' mail, and later, a much shorter distance to a waiting chair in front of the shop ....one foot in front of the other.

He will be fondly remembered sitting outside in his swing with his wife, warmed by the sun, surrounded by the lives and laughter (and squabbles) of the many who loved him.