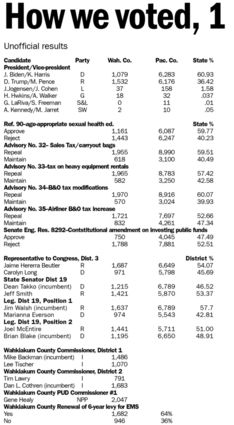 While Wahkiakum voters supported the Republican Trump/Pence presidential ticket in the national race that has generated so much interest in the election, voters in Pacific County supported Democrat Biden/Harris candidacy. As this was written Tuesday evening, the two tickets were locked in a tight race that could take several days to decide.

And while Wahkiakum voters steered to the right, tallies across the state supported Democrats and incumbent Republicans in the elections for state offices. 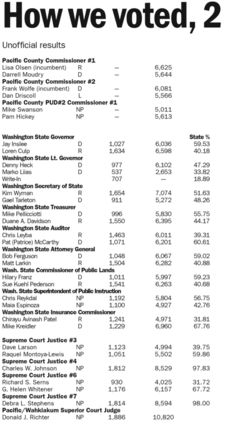 As of Tuesday evening, Wahkiakum County had a 77.97 voter turnout with 266 ballots left to count and the next count today (Thursday) at 12 noon.

In a non-partisan election for commissioner of PUD #2, challenger Pam Hickey holds a narrow lead over incumbent Mike Swanson, 5,613-5-011.

As of Tuesday evening, Pacific County had a 76.75% voter turnout with 150 ballots remaining and the next count at 4 p.m. Friday.