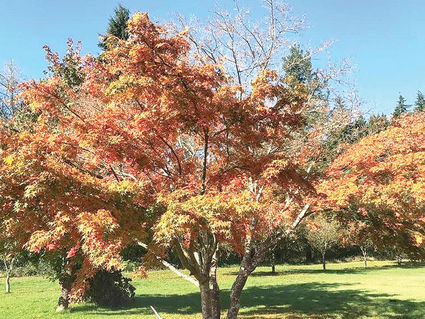 Washington became the 42nd state in the United States on November 11, 1889. A pioneer Seattle historian and realtor by the name of C. T. Conover gave the nickname "The Evergreen State" because of the abundant forests. Although the signs entering the state have "The Evergreen State" on them, it has never been officially adopted by the state legislature.

It is true that most of the trees are green; however, there are many that lose their leaves seasonally.

I had planted trees in the early 1970s for 16 cents a tree along the Rogue River in Oregon, and our crew planted tens of thousands during the tree planting season. I was able to see firsthand the awesome color changes of the leaves while living in Oklahoma where there are fewer trees that have the dominant color green as seen in this state. Since I moved here I still see the leaves on many trees changing their color.

I didn't especially enjoy the hard work of planting trees, but I did get a little satisfaction that I was giving back to nature what I had previously took. The idea of reforestation appealed to me. Since their founding in 1875, American Forests (americanforests.org) is the oldest national nonprofit conservation organization in the United States. They have been the leaders in producing hearty forests all over the nation. In the early 20th century, they united forest supporters in the creation of the U.S. Forest Service. American Forests persuaded Congress in 2018 after a decade-long campaign to provide established funding for preventing and fighting forest fires. Their focus now is to build a reforestation movement in America.

Tree reforestation led me to again wonder why leaves seasonally change their color. When I was in the third grade, I did a project to understand why leaves are the color they are. The inside of leaves get their green color from chlorophyll, which is a chemical that aids trees taking in sunlight by a process called photosynthesis. Leaves utilize the sunlight to separate carbon dioxide and water it absorbs. The leaves turn the carbon dioxide and water into oxygen, which gets ejected. The glucose the tree consumes for energy.

Leaves are like seasonal laborers that do their job only when supplies are coming in such as sunlight, water, carbon dioxide. When these supplies stop coming in, there's not much for the laborers to do, so the tree stops producing. Leaves require energy from the tree, so when the days become shorter, the tree no longer wastes energy on leaves which starts the internal chemical process that creates the colorful autumn vegetation.

The leaf color change depends on the amount of sunlight that the tree gets. As the days get shorter and when the nights reach a certain length, a chemical process in the tree begins to impede the connection between the tree and the individual leaves by creating an abscission of corky layers of cells. Abscission is the natural detachment of parts of a plant, typically dead leaves and ripe fruit. This abscission layer is to protect the branch when it inevitably becomes exposed to the open air, once the leaf has fallen, but it also interrupts the flow of nutrients that move from the branch to the leaf and back. As chlorophyll breaks down when exposed to sunlight, it must be constantly replaced. The abscission layer interrupts the process and once the chlorophyll begins to fade, the leaves change their color.

Two chemicals are responsible for the autumnal color changes of leaves. The first one is called a carotenoid that creates the orange and yellow pigments which are present in the leaf all summer long, but they're disguised by the green of the chlorophyll. Anthocyanin is a pigment that creates shades of red and purple. When the chlorophyll replenishment is stopped, the green starts to fade and the autumn colors appear. Carotenoids and anthocyanins break down after being exposed to sunlight. When leaves stay on the branch after the chemical processes have stopped, the colors fade until it becomes brown, from the result of a final chemical called tannin. Tannins are found in the membranes of the cells of the leaves and never fade causing brown to be the final color of leaves in late autumn. The combination of the carotenoids and the anthocyanins reacting to each other in different amounts creates the colors in the leaves with any chlorophyll left. These chemicals and the amount of each of them are dependent on temperature, moisture and sunlight. The autumnal color changes are now evident, but it really is The Evergreen State.