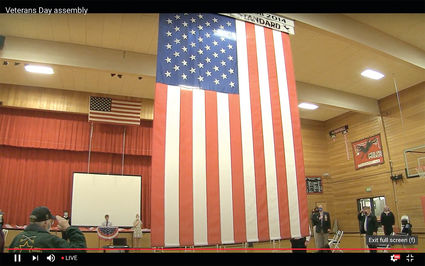 Wahkiakum veterans and a handful of Wahkiakum High School student leaders honored the flag during the singing of the national anthem to start the annual Veteran's Day Assembly, which was a virtual experience for most Wahkiakum students this year. Screenshot photos by Diana Zimmerman.

Last Thursday, Wahkiakum High School held its annual Veterans Day assembly, but because of the pandemic, they held it minus one key ingredient, an assembly of Wahkiakum students.

In order to make it a safe space to recognize Wahkiakum's own veterans in the midst of a pandemic, the school opened its doors to some of those veterans and a handful of students and staff necessary to hold the event, which was streamed online in real time on YouTube, on The Wahkiaum School District Broadcasting Channel, for students to watch at home.

"Thank you for coming, your presence in these crazy times means a lot to us," WHS Executive Liaison Landon Luce told the veterans in the high school gym.

Don Cox, who teaches history at WHS, spoke about his experience in the Air Force. He told listeners about a series of documentaries created by film director Frank Capra in the 1940s called Why We Fight, to explain to members of the military why they were fighting and who they were fighting against.

"I believe that today we honor veterans for that exact same reason," Cox said. "This is one of the fundamental purposes behind Veterans Day, to remind us all what we have been fighting for and who and what we are fighting against."

Renea Freeman, who supported her husband, Superintendent Brent Freeman, in his role as a Naval commander, spoke about her experience as a wife in the Navy, offering up key words like hardship, sacrifice, joy, sorrow, excitement, and more.

She shared a story she was given when their journey in the Navy began about the qualities needed in a military spouse.

"Military spouses are the true behind the scene characters," Freeman said. "Today as we honor our veterans for all they did for our country, I would like to take the time to honor military spouses for their selfless dedication, sacrifice and love, not only for their service man or woman, but for their country. I am very proud to be in the ranks among them and even more proud to say I'm not just a wife, I'm a Navy wife."

Bill Tawater, who was in the Air Force for 24 years, shared some thoughts. 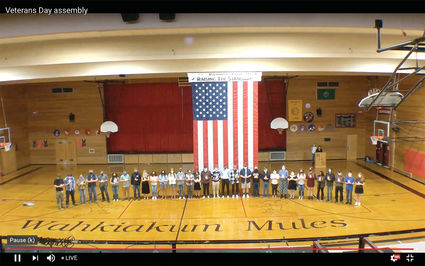 Half of the Wahkiakum High School Class of 2021 performed a candle ceremony honoring local veterans.

"To us it is not just another day, overlooked and ignored," he said. "To more than 1.5 million members of the VFW, it is a day to celebrate, a day to honor the millions of soldiers, sailors, airmen, marines, and coast guard, who have subsequently gone wherever and whenever called."

Tawater introduced Tom Irving, the oldest member of the local VFW post, who spoke about his experience in World War II.

The students recognized each branch of the military, and then a video showed the Class of 2021 performing the annual candle lighting ceremony, as they read the names of all the local people who have served in the military.

"We love you veterans," students exclaimed in a recording from one J.A. Wendt Elementary classroom.

To watch the assembly in its entirety, look for the video on the Wahkiakum School District Broadcasting page at YouTube.com.