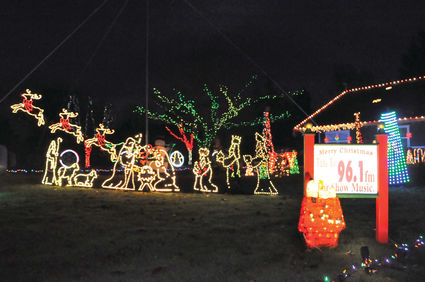 Holiday lighting decorates the residence of Todd and Nicole Wilson on Morgan Drive, Cathlamet, every December. One can even listen to Christmas music while enjoying the display.

It's 48 Morgan Drive, but you don't really need to know that, because after 5 p.m. most any night in December, the lights beckon you to the Wilson home.

"When I was a little kid, we would always go to Port Angeles for Christmas with my grandparents," Todd Wilson said. "My grandpa's big thing was to drive around Christmas Eve and look at all the lights. There were some neighborhoods that would go over the top in Port Angeles, and I remember thinking that was really cool."

Wilson began his own display when he and his wife, Nicole, had their first house on Cedar Drive and their first child on the way, nearly 23 years ago.

The light show has gotten a little bigger since then.

"When we had this house built, I had the electrician, a friend of mine from Castle Rock, wire it," Wilson said of their home on Morgan Drive. "I told him I wanted a separate circuit for Christmas lights. He said okay; we'll put up a couple outlets in the overhang."

"No," Wilson told him. "I want some real extra power."

"Okay," his friend said, even then not really comprehending Wilson's plans for light domination. "You'll never outdo this."

Wilson outdid it alright. These days he has to add power from his shop to the front yard.

"I'm always on the brink of popping breakers," Wilson laughed.

"This is a big thing," he said. "This has grown and grown and grown. We've been in this house 13 years and of course it didn't start anywhere near this."

As soon as there is a bit of nice weather in November, you can find Wilson up on the roof, getting his least favorite part of the project out of the way. It takes him the better part of five days to set up the lights, and another two days to test everything, or redo lights.

"It's kind of streamlined. I add to it, but it all hooks back up the same way," he said. "Over the years I've gotten smarter on how to set it up. It's all staged in the attic in my shop, and I bring it down, and do what needs to be done first and go."

Every year he tries to add something new, whether it's a suggestion from Nicole, an idea he's seen online, or more rarely, a new purchase. Wilson has made two thirds of the decorations himself.

"Nicole might joke about my fetish with Christmas lights, but she's guilty," he said, laughing. "We drive around and look at Christmas lights all over the place. I subscribe to a website called Planet Christmas and it has all kinds of new ideas and contests all over the country. I don't enter those because there are people that go way more over the top than I can."

Why does Wilson do it? 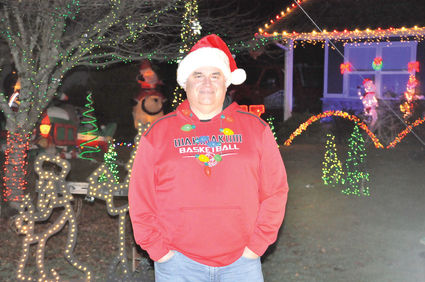 "I enjoy people being happy," he said. "I enjoy doing it and I enjoy all the messages, or people honking out front, or getting text messages from people letting us know they are sitting out front."

"Shoot," Wilson added, "there are people that will come several nights a week and sit out there. It's amazing how many people come by. We enjoy it. It's just fun.

As for how many lights there are, he couldn't even guess. But, he admits, it does double his electric bill for the month. He doesn't care.

The Wilson Christmas light show usually begins on the first Saturday in December. The lights are on from 5 p.m. to 10 p.m., seven nights a week, and from 5 p.m. to midnight between Christmas Eve and New Years Eve. Christmas music is playing as well, with seven songs currently on rotation.