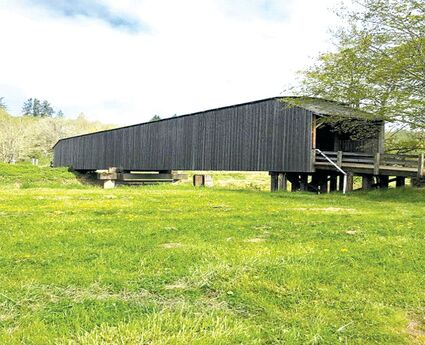 Tourist Attractions for the Locals

This may seem a bit redundant for some; however, in defense of the readers who have been bombarding me with questions about the area and what to look for as a learning experience as well as an educational one. This is also in response to the many new arrivals to the community (less than 10 years) who have also inquired as to the historical significance of many of the old buildings. This is a brief summarization of just three of what I consider the most significant building structures in the Westend. The first is the Grays River Covered Bridge followed by the Pioneer Lutheran Church and ending with the Walker home in Grays River.

This wonderful historical covered bridge was originally constructed in 1905 as a truss bridge in order to allow horse and wagon agricultural traffic to cross the river. This has become Grays River's greatest prominent landmark. It was Hans P. Ahlberg, who owned a dairy farm that spanned both sides of the river, that became involved in convincing the county commissioners to approve the task.

The bridge was built on his property by the Ferguson & Huston Company from Astoria, Oregon. It was covered three years later in 1908 in order to preserve the wooden trusses from the effects of the area rains. The roof of the covered bridge was originally built of board and batten cedar siding with a capped tin roof.

In disrepair and at risk of being torn down the bridge received a major restoration and reconstruction in 1989 from residents who worked to raise funds for restoration. Dulin Construction from Centralia completed the reconstruction for a cost of just fewer than $300,000. To maintain the bridge's historical appearance steel beams with a wood veneer were included.

On September 30, 1989, Grays River resident and author, Robert Michael Pyle, served as master of ceremonies in rededicating the bridge to public use. This is the only covered bridge still in use as a public highway in Washington State. In 1971 it was added to the National Register of Historic Places.

Deep River Pioneer Lutheran Church was added to the National Register of Historic Places in 1974. This Gothic Revival style church was built in Deep River and was the area's first organized Evangelical Lutheran Church entirely constructed by a community of Finnish settlers started in 1898 and was completed in 1902.

The property on which the church stands was donated by local resident Mike Swanson's great-uncle Erik Maunula. The lumber was bought for $2.50 near Raymond, Washington. The lumber was taken from a two story building that was supposed to be a boarding house and tavern. The church congregation in the 1930s moved to Naselle following the decline of its membership. The church is usually open for viewing during Deep River's Finnish-American Folk Festival.

I have loved researching the history of the Westend. This has given me somewhat of an insight to the history of the community and my stories take on a more personal feel so the history comes alive again. The pioneer Samuel Walker was the first permanent white person to settle in Grays River in 1868. His old house which was built in 1870 is still located across the street from Duffy's Irish Pub. This man appears in early Grays River history only to disappear. The following is a synopsis of his life.

Samuel Charles Walker Sr. was born on August 15, 1837 in Hamilton, Butler County, Ohio. His parents died when he was young and the only relative able to take him in was his grandfather. For whatever reason the arrangement was not working, so at the age of 12 his grandfather hired him out as a "wagon boy" to an outfit planning an overland wagon train to the Oregon country. The party of pioneers after many hardships arrived at their destination in Hillsboro, Oregon sometime in 1850.

At the age of 18 in 1855, Samuel joined the Oregon Volunteers and served as a scout in southern Oregon. Twice he was taken captive by one of the tribes, but he was able to escape back to his outfit. After 18 months, he was mustered out and he returned to Hillsboro. In 1857 he joined the Washington Volunteers and served for a year. As a result of these experiences he became a life member of the Oregon Pioneer Association as well as the Indian Wars Veterans.

Julia Sigler was a strong willed girl who had also survived the journey at the age of five across the country in a covered wagon from Peoria, Illinois on March 22, 1843. Her parents were killed in an attack by Indians while traveling west to Oregon. She arrived in Hillsboro, Oregon in 1849. She led a hopeless childhood as a servant to one of her benefactors. While living in Hillsboro, Samuel, then 21, met and married Julia on Christmas Eve 1858. She was only fifteen. 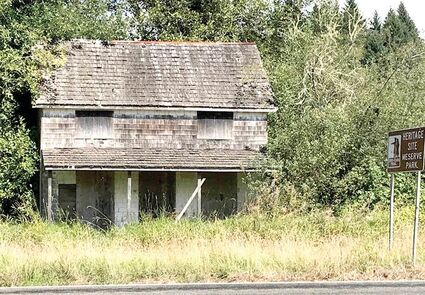 In 1867 this pioneering couple moved to southwestern Washington to the Grays River Valley on April 20, 1868 where they would become the first white settlers to become residents. It is still there today after almost a century and a half at the junction of SR4 and Loop Road. This young couple already had three young children, two girls and a boy. On July 2, 1870, Samuel Charles Walker Jr. was born becoming the first white to be born in Grays River. This couple had a total of seven children. They would live in Grays River valley for 37 years watching the community grow with them. They had a store on the river that served as a post office of which Julia was Postmistress for 15 years.

This old home is a very good candidate for becoming a heritage site. This historical landmark is right in front of the Meserve Heritage Site sign. The irony is that the Meserve store is gone, but the Walker home is still standing. This old home could easily become a great tourist attraction that could generate money for the county. With new people constantly moving into the community, it is important to many to keep the county history alive. This can be done now as an important step in preserving what is left before time erodes it to nothing. It is amazing that this home is still barely standing. This old house is truly a treasure hidden in plain sight here in Grays River.