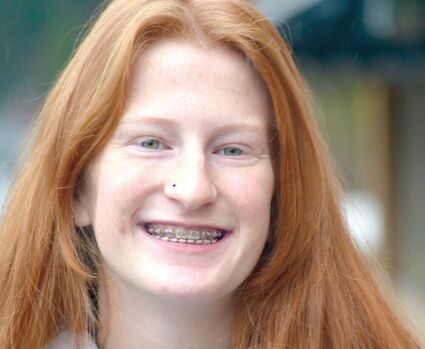 Teylor Sauer's favorite hour of the day is spent in the office, as a teacher's assistant. It's a bit like an internship, and it allows her some creative freedom. As part of ASB leadership, she sometimes uses the period to work on projects and plan for committees.

She has a lot to be proud of, whether it's planning the Veterans' Day assembly, Christmas activities, or a project that improved life for many students at Wahkiakum High School.

The locker room showers have always been communal, but when Teylor and two other students decided they wanted to create more privacy, they actually made it happen, constructing stalls with help from her dad, Chris.

"We thought the showers would create a more comfortable environment that a lot of students don't have at the school," Teylor said. "Some kids don't get to shower at home. A survey said a lot of kids would use the showers if they had privacy."

They did, too. Last year students began showing up before school to shower, and once again to use them after morning practices and after games.

When Teylor is not at school, she's picking up shifts at the grocery store, or spending time with friends. She is particularly excited to finally begin volleyball practice this week.

"I think that all the players on the team this year are very like-minded. We have really strong team chemistry on and off the court. I'm really excited for that to work in our favor," she said.

Teylor will also turn out for track and field, and while she may waffle on the hurdles event, she'll be looking for a personal record in the long jump, and running a leg of the 4x200 relay.

Teylor has been accepted to Washington State University. She plans to study business and psychology, and possibly go on to work in human resources, or maybe fashion merchandising.

There are dreams of New York City, whether for two months or two years, to soak in the quick pace of the city, and a few of the shows.

She loves the theater. Now that Hamilton has been filmed, she's seen it multiple times. She also had the opportunity to see Dear Evan Hansen on one school field trip, and The New Colossus on another.

Teylor, who loves to start her day with Red Bull spritzer from Julie's Java, is the daughter of Angi Sauer and Chris Sauer.